The University of London, representation and the 1867 Reform Act

Between 1832 and 1868, Oxford, Cambridge and Dublin University each returned two members to Parliament, in constituencies that enfranchised M.A. and doctoral graduates. The Oxford and Cambridge University constituencies had sent two burgesses each to Parliament since 1604, in recognition that they were distinct corporate interests that required parliamentary representation. For similar reasons, and because of its Anglican status, Dublin University was enfranchised in the Irish Commons in 1613. Dublin University survived as one of the 100 Irish seats at Westminster following the 1800 Act of Union, and in 1832, like Oxford and Cambridge, it was restored to its pre-1800 status as a double-member seat. 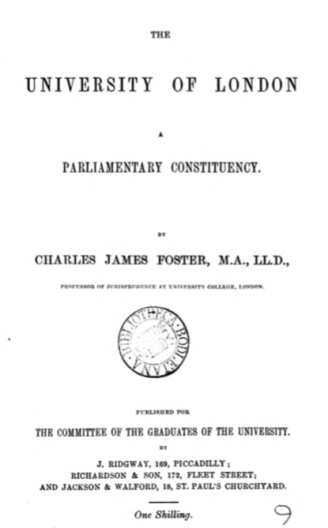 C. J. Foster, The University of London: A Parliamentary Constituency (1851)

By the early 1850s the University of London (which was established by charter in 1836) had turned its attention to lobbying for its own parliamentary representation. The university’s efforts were based on its claims of excellence and its unique position as a non-denominational degree awarding body with international reach, at the forefront of medicine, the arts and law.  Apart from some details over how graduates might qualify to vote, by 1852, Britain’s leading Liberal and Conservative politicians had signalled their agreement with these demands. As a result, every Liberal and Conservative reform measure between 1854 and 1867 contained some provision for parliamentary representation for University of London graduates.

Mid-Victorian politicians were so supportive of University representation because of two interrelated aspects of contemporary debate around representation. First, the idea that the electoral system represented interests, not individuals. And second, the context of wider reform debates between 1848 and 1867 about how the franchise might be safely extended to working men.

By the middle of the eighteenth century, university seats had been appropriated into a defence of the electoral system that held that its primary purpose was to provide for a balanced representation of the nation’s political, economic and geographic interests in the Commons. William Blackstone, in 1765, considered the University seats were:

to serve for those students who, though useful members of the community, were neither concerned in the landed nor the trading interest: and to protect in the legislature the rights of the republic of letters.

Blackstone, Commentaries on the Laws of England: Book 1 (1765)

While theories around representation had certainly evolved by the mid-Victorian period, Britain’s leading legislators generally still agreed that the main purpose of Britain’s electoral system was to provide for a balanced representation of interests.

Different politicians found different ways of rationalising what these interests were, and how they might be balanced. But for someone like Lord John Russell, who was a leading figure in the passage of the 1832 Reform Act, Whig-Liberal Prime Minister, 1846-52 and 1865-66, and long term ally of the University of London, the representative system was understood in the following way:

Up until at least the early 1850s there was a strong impulse among many Whig-Liberals for more direct forms of interest representation in parliament. These ideas initially came to prominence during debates over the 1832 Reform Act, when suggestions for colonial, financial and legal interest constituencies were mooted by MPs. This was how the University of London was originally slotted into proposals for reform. In 1852, the Peelite First Lord of the Admiralty, and member of the University of London Senate, Sir James Graham, recommended constituencies for the new universities, the Inns of Court, East India proprietors and stockholders. On this basis, Russell’s failed 1854 reform bill proposed to enfranchise both the University of London and the Inns of Court.

While direct interest representation constituencies had fallen out of favour with most leading politicians by the late 1850s, suggestions for special voting qualifications did not disappear. Instead they morphed into ideas for ‘fancy franchises’, the educational franchise and plural voting. These ideas came from across the political spectrum and arose out of a specific problem presented by the reform debates of 1848-67. Once politicians had accepted the need to reform, the question was: how did you extend the vote without the working man overpowering every other interest or group which also had a right to representation in the Commons? While politicians increasingly courted the ‘working man’ they feared an increase of his electoral influence, ‘The Supporters of the Working Man’, Punch, April 1859

In 1859 the Conservative government of Lord Derby sought to broaden the borough franchise not by reducing the property qualification, but by extending the vote to those who, if they did not already qualify, had a certain amount of money in their pensions or banks, or were university graduates, clergy, barristers or attorneys. For the Conservative Chancellor of the Exchequer, Benjamin Disraeli, these ‘fancy franchises’, as they became popularly derided, were intended to ‘discard for ever that principle of population’ and avoid a ‘household democracy’, while providing representation to ‘all the interests of the country’. 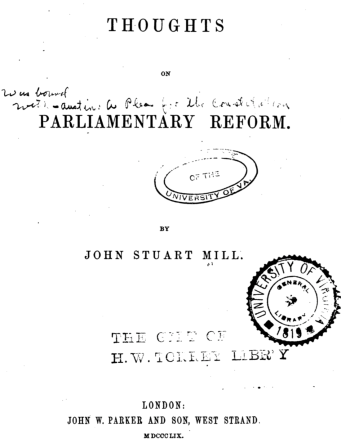 John Stuart Mill proposed a ‘plurality of votes in favour of those who could afford a reasonable presumption of superior knowledge and cultivation’ , Thoughts on Parliamentary Reform (1859)

Another proposal for dealing with this issue came from the advanced Liberal MP for Hull, James Clay. In 1866 he proposed that instead of reducing the borough franchise, it should be extended to those who passed an educational test. The test was aimed at enfranchising clergymen, teachers, office clerks and shop assistants, but most importantly ‘the most educated of working men’. Such a franchise was intended also to provide an opportunity for the uneducated working man who was willing to ‘sacrifice to the schoolmaster his leisure hours’ in order to prove his ‘honest earnestness’ and fitness to participate in the franchise.

One further solution for tempering the influence of the multitude was plural voting – the idea that a voter should get additional votes based on the value of his property, or an educational or financial qualification. Plural voting had been suggested in 1859 by the advanced-Liberal philosopher, John Stuart Mill. However, in 1867 several Conservatives also started to advocate plural voting, when it became apparent that Disraeli was genuinely considering extending the vote in the boroughs to all male householders.

In the end, none of these three proposals made it to the 1867 Reform Act. They proved too complex to implement, and for many appeared alien to constitutional precedent. Enfranchising the University of London, however, avoided both of these problems, as Oxford, Cambridge and Dublin provided models that could be easily replicated. Furthermore, and perhaps most importantly, enfranchising the University of London helped comfort parliamentarians in the belief that an educated body might do its bit to temper the influence of the working man following the introduction of household suffrage in the boroughs in 1867.

To find out more about the University of London’s first MP, Robert Lowe, visit our History of Parliament blog next week. The 1868 Scottish Reform Act also enfranchised two single-member Scottish Universities seats, and from 1918 additional university seats were created before their total abolition in 1950. To find out more about University representation see J. S. Meisel, Knowledge and Power: The Parliamentary Representation of Universities in Britain and the Empire (2011).

5 Responses to The University of London, representation and the 1867 Reform Act