MP of the Month: William Tooke and the royal charters of the University of London

Following our blogs on the creation of the University of London constituency in 1868 and its first MP, Robert Lowe, August’s MP of the Month is William Tooke. As MP for Truro from 1832, Tooke worked tirelessly to secure a royal charter for the London University (later University College London) that allowed it to grant degrees to its students.

The secular London University sparked controversy from its foundation in 1826 and was commonly derided in the Tory, staunchly Anglican press, as the ‘Cockney College’. SW Fores, Cockney College (1826), CC British Museum

The London University’s campaign to achieve degree-awarding status was a key battleground in the wider movement for religious freedoms in the aftermath of the 1832 Reform Act. The university had been the subject of considerable controversy since its establishment in 1826 as a non-degree awarding secular alternative to England’s only other universities, Oxford and Cambridge. As students at Oxford and Cambridge were required to sign the Thirty-Nine Articles of the Church of England, non-Anglicans were effectively barred from obtaining degrees in England.

William Tooke (1777-1863) was present at the first council meeting of the London University, where he was appointed treasurer and solicitor. The son of a pre-eminent London journalist, Russian historian and preacher, Tooke’s early life was spent practising as a solicitor in London from 1798. In the aftermath of the Napoleonic wars, Tooke used his legal expertise, as well as his father’s reputation, to establish himself in London’s thriving reform culture. By the end of the 1820s he was enmeshed in Bloomsbury’s network of ‘godless’ reformers, working assiduously behind the scenes for the London University, and its sister institution, the Society for the Diffusion of Useful Knowledge (SDUK).

Tooke’s work for the London University and the SDUK (and a raft of other learned societies and businesses during the 1820s) focused on the preparation of draft legislation, petitions and royal charters. These documents helped turn organisations that were usually dreamt up in a London tavern into secure legal entities with official powers enshrined in law.

He enjoyed some success in lobbying and working with MPs (many of whom were also members of these reforming societies) to push his draft bills and charters through parliament. But to be most effective he needed a seat in the Commons. As he was of insufficient status to stand for one of London’s prestigious borough or county constituencies, Tooke began targeting the Cornish borough of Truro from 1830 after securing the backing of a local merchant.

Tooke was unsuccessful at Truro at the 1830 and 1831 elections, largely as a result of borough’s closed corporation status. However, things changed following the 1832 Reform Act, which extended voting rights to the town’s middle-class Dissenters. These new voters returned Tooke to Parliament at the 1832 and 1835 elections, where he stood as a Reformer.

At Westminster Tooke supported the Whig governments of Grey and Melbourne on confidence issues, but stayed true to his independent status as a Reformer to vote in favour of corn law reform, the ballot, retrenchment, currency reform and the repeal of the malt duty. Unlike most new members, Tooke broke his parliamentary silence within days of taking his seat in the Commons and continued to intervene regularly, particularly in debates over municipal, electoral and legal reform. He was also active behind the scenes at Westminster, taking a keen interest in the business of the House, sitting on a large number of select committees and paying close attention to a wide range of public and private legislation.

It was Tooke’s quest to secure degree-awarding status for the London University, via a royal charter, that took up most of his attention. While the university had been offering classes since its foundation in 1826, it could not award degrees. The only English universities that could were Oxford and Cambridge, but they required students to take the Anglican oath. As Tooke explained to the Commons in 1833 this meant that the ‘whole dissenting community of England’ was ‘altogether precluded from academic honours’.

After introducing a failed motion for a royal charter for the London University in 1833, he entered abortive negotiations during 1834 with the Whig government (many of whom were founding members of the university) to secure a charter via the Privy Council. In March 1835, during the short-lived Peel ministry, Tooke secured a majority of 110 for his motion for a degree-awarding charter for the university. This was not the end of the story, however, as Tooke was required to enter further negotiations with the Melbourne government during 1835 and 1836 to find a way that King’s College London, which had been established by royal charter in 1829 as an Anglican alternative to the London University, could also be awarded the ability to grant degrees. 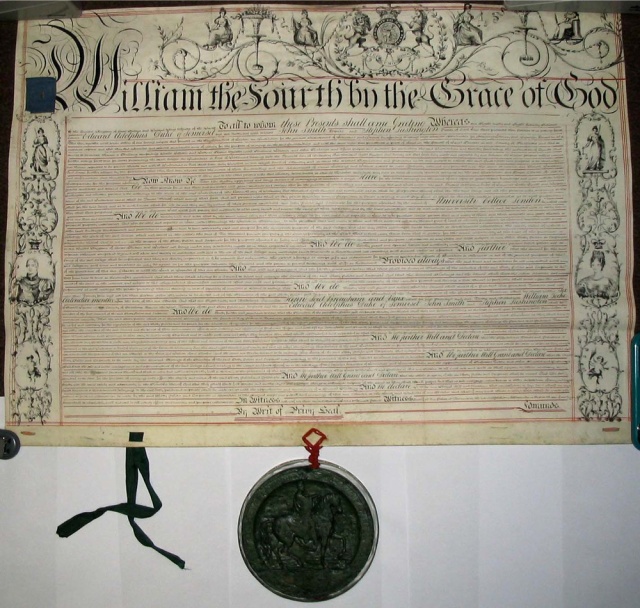 You can find out how Tooke’s parliamentary career progressed in his full biography, which will be published shortly on our free preview website. For details of how to obtain access to this or any other of our completed articles please click here.

1 Response to MP of the Month: William Tooke and the royal charters of the University of London