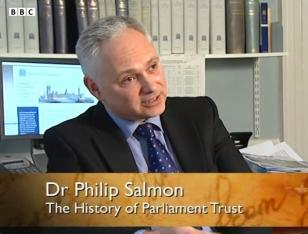 I joined the History of Parliament in 1997 after completing a doctorate at Exeter College, University of Oxford. For the next eleven years I worked on the award-winning 1820-32 House of Commons volumes, which were published by Cambridge University Press in 2009. I was appointed editor of the 1832-1945 House of Commons project in 2009 and since 2017 have been a Research Associate at Keble College, University of Oxford.

Research interests
• The development of democratic institutions (national, local and colonial) in Britain, Ireland and Australia, c.1800-1914; their practical workings and impact on the emergence of distinctive political identities; the related ideas, literature and historiography of reform movements
• Elections and the role of the MP in Victorian politics; the cult of the public figure and the changing practices and functions of popular representation
• IT applications in history: digitisation and data analysis; computer-based psephology; ‘digital humanities’ and the impact of the web on political history

‘A truly outstanding contribution to the field of parliamentary and electoral history’, REVIEWS IN HISTORY
‘One of the most important books on nineteenth-century England in recent years’, PARLIAMENTARY HISTORY
‘Outstanding’, HISTORY

Editor, ‘England’s “other” ballot question: the unnoticed political revolution of 1835’, in Partisan Politics, Principle and Reform, 139-163

‘John A. Phillips as a historian’, in Partisan Politics, Principle and Reform, pp. xxii-xxx VIEW