Club Government: How the Early Victorian World was Ruled from London Clubs

Earlier this year we were delighted to attend the launch of Seth Thévoz’s first book, Club Government: How the Early Victorian World was Ruled from London Clubs, published by I. B. Tauris. This book is based on research undertaken for Seth’s PhD thesis on ‘The political impact of London Clubs, 1832-68’, which was jointly supervised by Dr. Sarah Richardson, of Warwick University, and our editor, Dr. Philip Salmon, and funded by a PhD scholarship from the History of Parliament Trust. Part of Seth’s work included compiling a database of the club membership of every MP who sat during this period, which we are using in our biographies of the 2,590 MPs we are covering in our project.

As this summary of the book explains, Seth’s work provides important new insights into the political impact of London’s clubs. 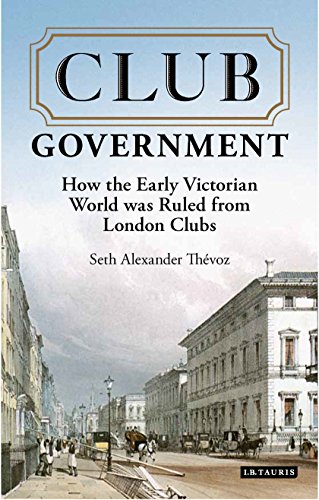 The phenomenon of ‘Club Government’ in the mid-nineteenth century, when many of the functions of government were alleged to have taken place behind closed doors, in the secretive clubs of London’s St. James’s district, has not been adequately historicized. Despite ‘Club Government’ being referenced in most major political histories of the period, it is a topic which has never before enjoyed a full-length study. Making use of previously-sealed club archives, and adopting a broad range of analytical techniques, this work of political history, social history, sociology and quantitative approaches to history seeks to deepen our understanding of the distinctive and novel ways in which British political culture evolved in this period. The book concludes that historians have hugely underestimated the extent of club influence on ‘high politics’ in Westminster, and though the reputation of clubs for intervening in elections was exaggerated, the culture and secrecy involved in gentleman’s clubs had a huge impact on Britain and the British Empire.

Many congratulations to Seth on his publication.

This entry was posted in Publications and tagged club government, political clubs. Bookmark the permalink.