‘The first humble beginnings of an agitation’: the women’s suffrage petition of 7 June 1866

Today marks the 150th anniversary of the presentation to Parliament of the first mass women’s suffrage petition on 7 June 1866. Signed by around 1,500 women, it was presented to the Commons by John Stuart Mill, who had been returned as Liberal MP for Westminster at the general election of July 1865. Among the most prominent signatories were Barbara Leigh Smith Bodichon, Emily Davies, Elizabeth Garrett (later Anderson) and the mathematician and scientist, Mary Somerville. However, thanks to a new resource released by Parliament’s Vote 100 project, it is now possible to search the names of all of the 1,499 women listed in an 1866 pamphlet as having signed the petition. Only two known copies of this rare document survive.

Petitioning was a well-used method of bringing issues to the attention of parliamentarians, having been deployed by anti-slavery campaigners, the Chartists and, as featured in one of our earlier blogs, the Anti-Corn Law League. The Liberal ministry’s introduction of a reform bill in 1866 had brought the question of the franchise to the fore, but its proposals for widening the electorate applied only to men. The women’s petition – couched in cautious terms, and side-stepping the potentially contentious issue of marital status – asked the Commons to ‘consider the expediency of providing for all householders, without distinction of sex, who possess such property or rental qualification as your Honourable House may determine’. 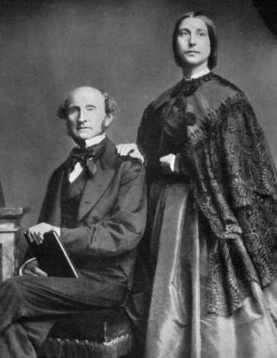 For Mill, the petition provided an important weapon against the argument that ‘the ladies themselves see no hardship’ in their exclusion from the suffrage ‘and do not care enough for the franchise to ask for it’. Writing to Caroline Liddell on 6 May 1866, he encouraged her to draft a petition, urging that ‘a woman who is a taxpayer is the most natural and most suitable advocate of the political enfranchisement of women’. In the event, it was Mill’s stepdaughter, Helen Taylor (who urged Bodichon that they should ‘commence the first humble beginnings of an agitation’), who produced the initial draft of the petition presented by Mill, although Liddell was among the signatories. The signatures, reportedly gathered within a fortnight, were collated at the London home of Clementia Taylor, whose husband Peter – a member of the Courtauld business dynasty – was Liberal MP for Leicester, 1862-84. (His biography is among those already completed for our 1832-68 project.)

With discussions on petitions occupying an increasing amount of the time of the Commons, the Liberal and Conservative front benches had agreed informally in 1835 not to allow debates when petitions were presented. Debates on petitions were formally abolished by a standing order in 1843. This meant that there was no substantive discussion when Mill presented the women’s petition on 7 June 1866.

Mill was, however, able to make some remarks on the petition when he moved on 17 July 1866 for the compilation of a return of the number of freeholders, householders and others who fulfilled ‘the conditions of property or rental prescribed by Law as the qualification for the Electoral Franchise’ but were ‘excluded … by reason of their sex’. Informing his fellow MPs that the petition had originated ‘entirely with ladies, without the instigation, and, to the best of my belief, without the participation of any person of the male sex in any stage of the proceedings, except the final one of its presentation to Parliament’, he emphasised ‘the number of signatures obtained in a very short space of time, not to mention the quality of many of those signatures’. Mill himself had been surprised by the petition’s size, having been willing to present a petition containing just 100 signatures. Seeing the ‘large roll’ containing the petition for the first time when he met Davies and Garrett in Westminster Hall, he declared, ‘I can brandish this with effect’.

Although Mill’s speech was brief – it occupied less than two columns of Hansard – he took the opportunity to note that Benjamin Disraeli, who had since become chancellor of the exchequer in Lord Derby’s newly formed Conservative government, had suggested during the debates on the Liberal ministry’s reform bill that there was ‘no reason why women of independent means should not possess the electoral franchise, in a country where they can preside in manorial courts and fill parish offices’.

Even before the failure of the Liberals’ reform bill had removed the possibility of introducing an amendment on women’s suffrage, Mill, showing his shrewdness as a parliamentary tactician, had decided that it was imprudent to pursue the matter any further that session. He did not wish, as he told a fellow MP, to be accused of ‘taking up the time of the House’; pressing a matter which had no chance of practical success risked being seen as deliberately obstructive. Mill did, however, achieve his aim of laying ‘the foundation of a further movement when advisable’. Outside Parliament, women continued to organise, and further petitions were presented in spring 1867.

Mill’s opportunity for bolder action came when the Conservative ministry introduced its own reform bill in 1867. On 20 May – which was, coincidentally, Mill’s birthday – he moved, in a powerful and eloquent speech, to replace the word ‘man’ in clause 4 of the bill with ‘person’. His amendment for female suffrage was defeated by 196 votes to 75 (including tellers). Petitions continued to be presented to Parliament as part of the women’s suffrage campaign, including a ‘survivors’ petition’ in 1890, signed by 78 of those whose names had been included on the original petition of 1866.

5 Responses to ‘The first humble beginnings of an agitation’: the women’s suffrage petition of 7 June 1866