A family affair: the Knightleys and Northamptonshire South, 1832-1868

The double-member county division of Northamptonshire South is often associated with the Spencer family, most notably Viscount Althorp (later the third Earl Spencer and older brother of Princess Diana’s great-great-grandfather), who played a key role in the reforming ministry of Lord Grey. However, the Spencers, including Althorp and his nephew, only occupied the representation of the division for a mere three years between 1832 and 1868.

In reality it was the Cartwrights and the Knightleys, who, through two father-and-son combinations, dominated the constituency’s electoral politics. Of the two, Charles and Rainald Knightley were the most successful. They represented one of the division’s seats uninterrupted from 1835, demonstrating that the key to electoral success was reputation, money and a firebrand form of agricultural, independent conservatism.

The Knightleys, whose Daventry estate lay in the west of the county, had returned MPs for Northamptonshire since 1420. Charles, born in 1781, was a celebrity in the county long before he was returned to Westminster. One of the best riders in the county’s famous Pytchley Hunt, he once allegedly leapt 31 feet over a brook near Brixworth Hill on his horse ‘Benvolio’ (the official world record for such a feat is still just over 27 feet). He was also a renowned cattle breeder and spent considerable resources on agricultural improvement on the family’s estates.

He had been an active character in Northamptonshire’s Conservative electoral politics since 1826, and after failing to get elected in 1831 was returned for the new southern division in 1835. His charismatic speaking style, willingness to pay close attention to voter registration and canvassing, as well as his outspoken support for the Protestant Church and the interests of agriculture – he was a fierce advocate of protection – meant he comfortably retained his seat until his retirement in 1852. 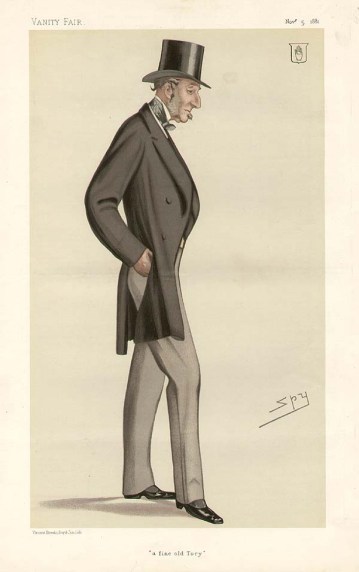 Charles’s stranglehold over the county exasperated his local Liberal opponents (who repeatedly criticised his influence over the Tory Northampton Herald) and bewildered some national commentators – The Times mocked him ahead of the 1847 election, calling him ‘a well dried specimen of the old English squire’, who should be ‘ticketed and put in a museum’. Nevertheless, Charles’s critics failed to knock him off his perch, and on his retirement he rubbed salt into their wounds by successfully supporting the candidacy of his son, Rainald, who replaced him as one of the constituency’s two MPs.

Charles’s decision to support his son’s candidacy in 1852 also angered those in the upper echelons of the local Conservative party who preferred an alternative candidate. Importantly, the internal party dispute over Rainald’s candidacy received extensive coverage in the local press and quickly established his reputation in the county as an ‘independent’ Conservative – a status he actively cultivated, with considerable success, throughout his subsequent forty-year career as an MP.

Until at least 1868, Rainald repeatedly described himself to the electors in an ambiguous manner. In 1859, for instance, he stood as a ‘moderate and liberal, but consistent, Conservative’. However, in Parliament he followed in his father’s footsteps, aligning himself with a group of backbench Tory ‘Old believers’ led by ‘Big Ben’ Bentinck, who shared a deep disdain for Disraeli’s attempt to establish a disciplined Conservative party at Westminster.

This distrust of Disraeli was reflected in the division lobbies, and his support for Palmerston over the Chinese War in 1857, as well as his outspoken support for the established Church, helped him to stand out from his Liberal and Conservative rivals at the 1857 and 1859 elections. His independence from Disraeli also allowed him to play a key role in the debates over parliamentary reform between 1866 and 1868. In 1866 he coalesced with the Liberal ‘Adullamites’ to prevent the passage of the Liberal ministry’s reform bill, and in 1867 he was instrumental in forcing Disraeli to underpin his Conservative reform bill with a separate measure dealing with corrupt practices.

Rainald’s good finances were also important, as they helped him to maintain his reputation for independence. This was perhaps best exemplified when his fellow Conservative incumbent Henry Cartwright was forced to retire ahead of the 1868 election, after Rainald refused to stand alongside him on the basis that Cartwright would be beholden to the whims of the local party due to his inability to fund his own election campaign.

The Knightleys’ brand of independent Conservatism proved remarkably popular with electors in Northamptonshire South, and Rainald continued to represent the county until his retirement in 1892, when the centuries-long Knightley link with the representation of Northamptonshire came to an end.

The full biographies of Charles and Rainald Knightley, as well as Northamptonshire South’s other MPs during the 1832-68 period, will soon be available on our preview site.