MP of the Month: Edward Greene, brewer and businessman

At Westgate, in the heart of Bury St. Edmunds, stands the historic Greene King brewery, first established in 1799 by Benjamin Greene, a member of a Nonconformist Northamptonshire family of drapers, and his business partner William Buck. The brewery had a rocky start and it was only when Greene inherited a West Indian plantation in 1823 that its financial future was secured. The stellar transformation of the family business into one of England’s most successful breweries took place later, in the mid- to late-nineteenth century, and was orchestrated by Greene’s third son, Edward (1815-1891), who took over the reins of the company in 1836 and was elected Conservative MP for Bury St. Edmunds in 1865. 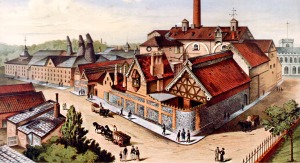 Depiction of Westgate Brewery in the 1830s, copyright Greene King

In many ways, Edward Greene was not the archetypal Victorian Conservative MP. Firstly, he was zealously devoted to free trade: the foundation of his success was disposing of public houses tied to his brewery and instead creating a system of agents who travelled East Anglia, promoting his Burton-type pale ale – an amber-coloured liquid known for its distinctively hoppy flavour – which was sold at a shilling per gallon. Secondly, whereas Conservatives were generally rooted in the Anglican Church, his ancestors (though not himself) were Nonconformist. He was, however, a quintessential product of the Victorian era: the railway boom allowed his agents to widely sell his beer and he shored up his political popularity by successfully promoting the Bury St. Edmunds to Thetford railway, an achievement which he was never slow to remind the electors about on the hustings.

While his ale was smooth and mild, Greene was a rather gruff character. He had a strong Suffolk accent and was unapologetically plain spoken. His distaste for Gladstone’s lofty oratory was matched only by his dislike of the ‘vile, black turgid’ beer of the early Victorian era, and after one particularly protracted debate he complained that, in the Commons, it often appeared that ‘black was not always black, or white always white’.

Greene contributed regularly and forcefully to debate, and there was always a strong moral undertone to his message. He was a vociferous supporter of improving housing for the poor, believing that many dwellings were ‘unfit for a sporting dog’, and he was particularly concerned that overcrowding in agricultural labourers’ cottages led to moral decay and physical deterioration. He was careful, though, not to denigrate the agricultural labourer. In the mid-nineteenth century the general view of the rural worker in Britain was a dim one – the Morning Chronicle reported in 1850 that the agricultural labourer was a ‘physical scandal, a moral enigma, an intellectual cataleptic’ – and Greene repudiated such ‘misrepresentation’, arguing instead that labourers genuinely wanted to better themselves. He also set new standards of housing for his own workers in Bury St. Edmunds, building a number of vastly improved dwellings.

Over the course of a parliamentary career that lasted twenty-three years, Greene established himself as a notable authority on commercial matters and unlike Liberal brewers, such as the Bass family, his natural political support was not threatened by the temperance and prohibitionist movement. His brewing interests, however, remained his foremost concern. After 1868, under pressure from a rival brewer, Frederick William King, his commitment to free trade softened and he began to acquire the security of public houses tied to his Westgate brewery. In 1887 he merged companies with King, creating Greene King, which owned 150 public houses and possessed capital of over £550,000. He became the first chairman of the board of directors, an office he held until his death in 1891.

The Greene King brewery at Westgate in Bury St. Edmunds, which is open to the public, is a tangible reminder of Greene’s success (just as the beer is a palatable one), but his parliamentary career, usually overlooked, offers an important insight into the increasing diversity of Conservative MPs in the Victorian era.

This entry was posted in Biographies, MP of the Month. Bookmark the permalink.