A ‘pocket’ borough or a borough needing deep pockets? Abingdon’s elections in the nineteenth century

Posted on November 6, 2020 by salmonphilip

In this blog, originally posted on the main History of Parliament site, Dr Philip Salmon examines the parliamentary representation of Abingdon in the 19th century.

Abingdon was widely regarded as an easily managed ‘pocket’ or ‘nomination’ borough during the 19th century. For a while it certainly had all the appearance of being one. During the decade and a half either side of the 1832 Reform Act its politics were completely dominated by two influential MPs. From 1818 until 1832 John Maberly MP, a wealthy cloth manufacturer and banker – the epitome of a self-made entrepreneur – effectively bought the borough. His generous gifts of coal to the poor and distribution of one guinea ‘treating’ and dining tickets to every elector ensured his return as a Whig at five successive elections before 1832, in four of which he faced no opposition. His connection with Abingdon’s principal trade, the manufacture of cloth and carpets, also secured him support, though his own business interests were based in Scotland and often viewed as rival operations.

Abingdon’s oddities as a constituency also shored up Maberly’s position. Before 1832, Abingdon was one of just five English boroughs that elected one MP rather than two. The lack of a second seat greatly reduced the number of candidates willing to risk the expense and trouble of a contest. Abingdon’s franchise was another factor. Before 1832, all residents who paid local taxes were eligible to vote, as a part of a ‘scot and lot’ franchise. Around 300 inhabitants fell into this category, but doubts about who qualified after long periods of uncontested elections meant that the result of any poll would almost certainly be challenged on petition, at considerable expense. Regular changes to the local rate assessments used to determine this type of franchise further muddied the waters. 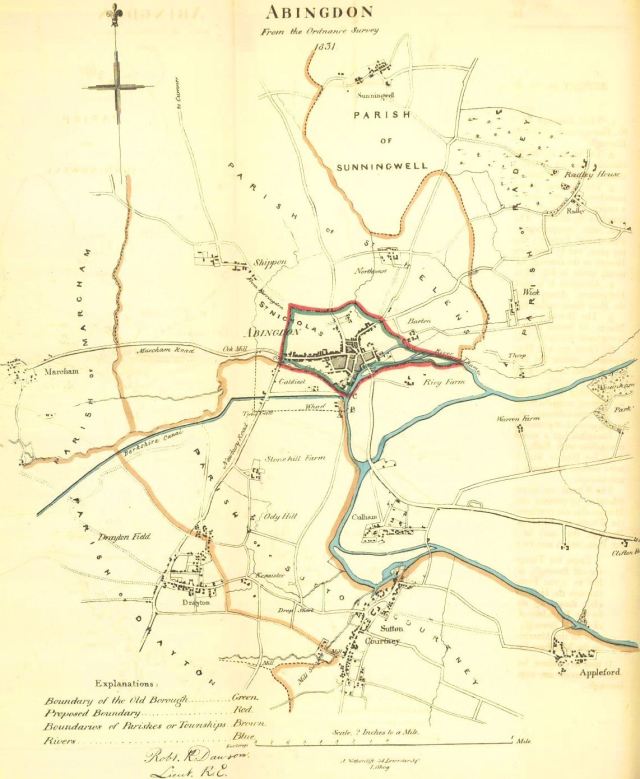 One striking consequence of Abingdon’s ‘scot and lot’ franchise was that the ‘Great’ Reform Act of 1832 made almost no difference to the size of its electorate. Most people who qualified for the new £10 household franchise were already ‘scot and lot’ voters. The Reform Act also made no changes to the borough’s boundaries. Maberly’s dominance therefore looked set to continue after 1832. In the event, however, the dramatic collapse of his finances in 1832 and his ensuing bankruptcy forced him to abandon politics and flee to the Continent.

His replacement as Abingdon’s MP was Thomas Duffield of Marcham Park, a local Tory squire, who easily saw off a challenge by Maberly’s son William Leader Maberly at the 1832 election. Duffield’s immense wealth – he had married an heiress to the fortune of John Elwes MP – gave him the same sort of hold over Abingdon that Maberly had enjoyed. The fact that he was a Tory, albeit of an ‘independent’ and moderate kind, seemed to matter less than his ability to continue Maberly’s patronage and philanthropy, including coals for the poor. Re-elected without opposition in 1835, 1837 and 1841, Duffield eventually became so secure in his berth that he was able to act as the borough’s patron. In 1844 he resigned to provide a safe seat for the Conservative solicitor general Frederick Thesiger, who was duly elected unopposed.

Any resemblance Abingdon had to a pocket borough, however, was completely destroyed the following year. Emboldened by their recent gains in the town’s council elections, a group of reforming tradesmen and businessmen organised an opposition to Thesiger at the 1845 by-election, triggered by his appointment as Conservative attorney general. Led by John Thomas Norris, a London paper manufacturer with local paper mills at Sutton Courtenay and Sandford-on-Thames, and Gabriel Davis, an Abingdon wine and grain merchant, the group brought forward the wealthy nabob General James Caulfeild as their candidate. Although he was narrowly defeated after a notoriously venal contest, at the 1847 election they tried again. This time they came within three votes of success. In 1852 Thesiger decided he had had enough and transferred to the safer (and cheaper) seat of Stamford. A series of Tory hopefuls then attempted to muster support but all quit, leaving the Liberal Caulfeild to be elected without opposition. 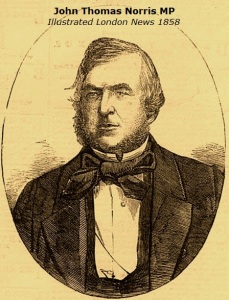 Caulfeild’s unexpected death shortly after his election set in train a different series of challenges to the status quo in Abingdon. Although Caulfeild had been invited to stand by Abingdon’s tradesmen, he had also been acceptable to the local Whig squires and gentry who traditionally dominated county politics. The suggestion that the paper manufacturer Norris now replace him, however, was firmly resisted by the local aristocracy. They instead settled on the former Conservative MP for Oxfordshire Lord Norreys, who had recently become a ‘Liberal-Conservative’. Norris reluctantly agreed to stand aside and support Norreys, but only on the understanding that he would be next in line for any vacancy. When Norreys succeeded to his family’s peerage just two years later, however, a more ‘moderate’ Liberal candidate, the young aristocratic army officer Joseph Reed, was introduced by the Whig squires with the support of an ‘influential’ section of Abingdon’s reformers. Norris, it was asserted, was too much of an ‘upstart’ and in ‘too great haste to get to the top of the ladder’.

With Norris refusing to give way a second time the 1854 by-election became a contest between two different types of Liberal candidate: one a nominee of the area’s traditional ruling elite, the other a self-made businessman and local employer backed by local tradesmen. Although Reed won, his tenure was short. Plagued by debt and fearing more election expenditure, he stepped down at the 1857 election and sought re-election elsewhere, before landing in debtor’s prison. The Whigs and Liberals were left with little option but to rally around Norris. The ‘pretentious upstart’, by now a director of the Eastern Counties Railway, was duly elected unopposed. A supporter of many radical causes in the Commons, he successfully saw off a Conservative challenge at the 1859 election. Like many businessman MPs, however, he found that Parliament interfered with the running of his company. Accused of neglecting his parliamentary duties, at the 1865 election he lost his seat to another well-connected ‘Liberal Conservative’. Within a year he was declared bankrupt. 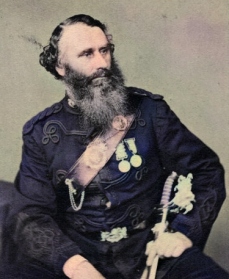 The aristocratic credentials of Norris’s successor were impeccable. A younger son of the Earl of Crawford, who had served with the Grenadier Guards in the Crimean war, including at Balaklava, Colonel Charles Lindsay sat until his defeat in 1874. At that year’s election the pendulum swung back again in favour of a businessman MP, the Liberal John Creemer Clarke, who as well as being Abingdon’s former mayor and chairman of the local railway, was appropriately enough another clothing manufacturer. He sat until the borough’s abolition in 1885.

Abingdon was just one of many small English boroughs in which local political activity during the Victorian era revolved around rival party attachments, interest groups and preconceptions about who was fit to be an MP. Underpinning these tensions the distribution of money, either in the form of bribery or patronage of local institutions, ensured that representation remained an extremely costly business, placing a serious strain on any MP’s purse. It remains to be seen how typical Abingdon was in this respect, but for 25 of the 67 years covered in this brief survey Abingdon was represented by an MP who subsequently went bankrupt. Abingdon may not have been a pocket borough in the traditional sense, but it certainly needed deep pockets.

This entry was posted in Constituencies, Elections and tagged Abingdon, Elections, pocket borough. Bookmark the permalink.

2 Responses to A ‘pocket’ borough or a borough needing deep pockets? Abingdon’s elections in the nineteenth century