‘The House divided’: the creation of a second division lobby for the Commons in 1836

With the creation of a second division lobby in 1836 having been mentioned during yesterday’s Commons debate on Restoration and Renewal, it seemed a good opportunity to share this post from our assistant editor Dr Kathryn Rix which originally appeared on the main History of Parliament blog. It traces the history of the transition from one division lobby to two. 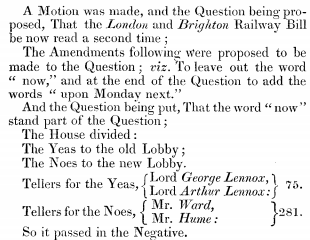 On 22 February 1836 an historic vote took place in the House of Commons, when the second reading of the London and Brighton Railway Bill was defeated by 281 votes to 75. What made this division so significant was not the legislation involved, but the manner in which the vote took place. As the Commons Journal recorded, ‘The House divided: The Yeas to the old Lobby; The Noes to the new Lobby’. That new lobby, used for the first time in this division, had only recently been built. Before 1836, when a vote was taken, the presumed minority had gone out into the lobby, while the presumed majority had remained in the chamber to be counted. It was only from 1836 that the Commons used the system of two division lobbies which we know today.

What caused this major change in procedure? One key factor was the desire to publish an official record giving the names of MPs who had voted in each division. The official Votes and Proceedings, published by the Commons on a daily basis, did not provide full division lists. Before 1836, the publication of detailed division lists outlining how each MP had voted was due to the efforts of individual MPs, who collected this information and supplied it to the press. Radicals such as Joseph Hume were among those who took the time to gather such information but, despite their efforts, the lists published in newspapers such as The Times were often inaccurate. Key divisions, where MPs were particularly keen that their constituents should know how they had voted, were often followed by a flurry of letters from MPs to the press, correcting the record. But as The Times pointed out in March 1835,

‘we are not responsible for the accuracy of these lists. We shall be very glad when the house has discovered some plan for furnishing exact lists.’

The Commons was already considering the matter, which had been raised by Radical MPs soon after Parliament assembled for the first time after the 1832 Reform Act. Moving that the Commons should publish an official record of each division, ‘giving the name of each Member in the Majority and Minority’, the Radical Daniel Whittle Harvey declared that

‘In a Reformed Parliament he believed, that all hon. Members would be desirous that their constituents should know how they voted, and the part they took upon every occasion.’

This was particularly important for radical MPs keen to show their constituents that they were diligent representatives who were redeeming their election pledges by voting for reforms such as the ballot and reductions in taxation. It was also part of a wider move to give greater publicity to the activities of the Commons. Other MPs, however, raised concerns that it would be impossible to produce accurate division lists without causing ‘great delay’ to Commons business. Harvey’s motion was defeated, but the following year the Commons agreed to the suggestion of another Radical MP, Henry Ward, to appoint a select committee on the issue.

This committee’s preferred option was to use separate lobbies for the Ayes and the Noes, but it had to bear in mind the limited space within which the Commons operated. It therefore suggested instead that the usual tellers in divisions should be accompanied by two clerks – one would call aloud MPs’ names while the tellers counted them, and the other would write the names down. The presumed majority who stayed in the House would be dealt with first, bench by bench, and those who went out into the lobby would be recorded as they returned into the chamber. Despite some opposition – including from the Conservative leader Sir Robert Peel – in July 1834 the Commons voted by 76 to 32 to implement the committee’s recommendations that session.

The system was swiftly abandoned after a discouraging first attempt at taking three divisions using the new procedure on 17 July 1834. Some Members appear to have resisted the change, behaving in an ‘offensive’ manner towards Joseph Hume when he tried to record their names. In addition, although the largest of these divisions involved only 105 MPs, the new system failed to produce a completely accurate division list – the name of one MP who voted on the first division was omitted. It was agreed the following day to abandon the experiment. Hume himself argued that reform in this area was impossible without changes to the fabric of the House.

The destruction of much of the old Palace of Westminster during the devastating fire of October 1834 gave MPs the opportunity to make such changes. The Commons moved into the chamber previously used by the House of Lords (the former Court of Requests), and in March 1835 a fresh select committee was appointed to consider the question. Its report in May unanimously endorsed the two lobby system, and the building committee overseeing the temporary accommodation of the Commons agreed that there should be two lobbies. The architect, Sir Robert Smirke, estimated that an additional lobby could be constructed within a fortnight at a cost of £600.

The building of this second lobby took place during the parliamentary recess. In October 1835 the Morning Post reported that ‘surveyors are daily employed measuring the grounds and preparing their plans for the intended new buildings’, which included ‘the square boarded temporary erections, intended to communicate with the House of Commons, and form a division lobby’. This work appears to have been completed before the Commons reassembled on 4 February 1836. Two weeks later, MPs adopted the resolutions needed to implement the new arrangements. Peel complained that the extra clerks required would cause expense, but had ‘no objection to try the experiment’, which could always be reversed. Fittingly, Henry Ward and Joseph Hume, who had been such keen advocates of the second lobby, were the tellers for the Noes in the first division under the new system. An attempt in March 1836 by the Conservative MP James Barlow Hoy to reverse this reform gained no support. A second division lobby became integral to the Commons, and was one of the areas of Charles Barry’s new Palace which MPs inspected carefully when they tested their new chamber for the first time in May 1850.

The ‘Aye’ division lobby in the new Palace of Westminster

4 Responses to ‘The House divided’: the creation of a second division lobby for the Commons in 1836