‘The Donkey and his young asses’: stationery, corruption and the short-lived parliamentary career of Sir John Key (1794-1858)

Portrait of Sir John Key in his mayoral robes, with his right hand on a petition for the reform bill, February 1832, M. Pearson (1832) CC British Museum

This month our research fellow, Dr Martin Spychal, takes a look at the humiliating demise of Sir John Key, or ‘Sir Don Key’ as he was widely mocked at Westminster. As Lord Mayor of London and one of Britain’s most prominent wholesale stationers, Key was returned for London at the 1832 general election. He was forced to resign eight months later, however, after being exposed for accepting a government contract and lying to the Prime Minister to secure a job for his son…

Key was born in London in 1794 and by the early 1820s was a partner in his family’s wholesale stationery firm, Key, Brothers and Son. Based at 30 Abchurch Lane, London, the company was regarded as one of the ‘most opulent’ stationers in the country thanks to its extensive contracts with the book and printing trade, as well as the ‘commercial world at large’.

Key’s family had maintained close connections with the City of London Corporation since the mid-eighteenth century, and in 1823 Key was elected to the City’s Court of Aldermen. Quickly developing a reputation as a devout and outspoken Dissenter, Key confirmed his political aspirations at the 1826 election when he stood briefly as an anti-ministerial candidate at Chippenham.

In November 1830, aged 36, Key entered the national consciousness, when as Lord Mayor of London his advice to the Tory Prime Minister, the Duke of Wellington, led to the cancellation of William IV’s planned attendance of the annual Lord Mayor’s procession. City-wide unrest over the recently established Metropolitan Police, discontent with the government’s unwillingness to introduce parliamentary reform and the recent July Revolution, led Key to warn Wellington that ‘a set of desperate and abandoned characters’ intended to attack the Prime Minister during the procession.

The subsequent cancellation of the appearance of the King and his ministers was quickly condemned as an act of cowardly self-preservation by Wellington. That ‘John Key’ and ‘Mayor’ rhymed with ‘Donkey’ and ‘Mare’ proved too much to resist for the nation’s satirists, who immediately took to depicting the Prime Minister taking counsel and running scared from a grotesque long-eared equine beast. As Bell’s Life in London mocked:

…he who triumph’d o’er each foe,

And laid the great Napoleon low,

Within days, Wellington’s government had been replaced by the reforming Whig ministry of the 2nd Earl Grey. Key proved a vocal supporter of the Whig government and their reform legislation, and in August 1831 was rewarded with a baronetcy. In a controversial move that owed much to his support for the Grey ministry, Key was re-elected Lord Mayor for a second term in November 1831 – which was this time accompanied by the customary ceremonial of a full procession and a ministerial-attended banquet.

Key in his mayoral robes in 1832, standing between the pro-reform MPs for London, Alderman Wood and Alderman Waithman, as a hangman decapitates a bust of Wellington in the Guildhall Chamber: H. Heath, Jack Ketch executing sentence on a culprit (1832) CC British Museum

Capitalising on his status as Lord Mayor, Key was returned to Parliament for the City of London at the 1832 general election. As a reformer, he campaigned for the repeal of the corn laws and the abolition of slavery, and claimed leadership of the metropolitan campaign to abolish the unpopular house and window taxes. Ironically, given future events, he professed his support for ‘every practicable measure of economy and retrenchment’, including the ‘abolition of needless and sinecure places’ and a reduction in ‘the remuneration of the public servants’.

Key took his seat in the Commons in January 1833 but by July that year rumours began to circulate that he had been granted a government contract to supply paper to the Stationery Office. To make matters worse, it then emerged that his son, Kingsmill Grove Key (1815-1899), had been employed by the Stationery Office, despite being under-age. 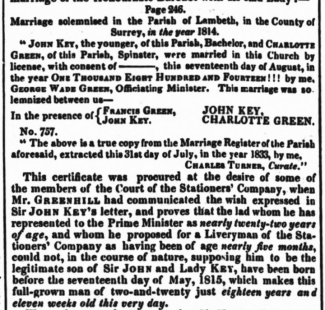 Members of The Stationers’ Company, of which Key had been master in 1830, obtained and published Key’s marriage certificate to prove his son was under 21: John Bull, 4 Aug. 1830

These allegations came to a head on Friday 2 August 1833, when the Tory MP for Launceston, Henry Hardinge, announced his intention to present a petition from ‘certain stationers and paper-manufacturers’ calling for Key’s election to be declared void on the grounds that it was illegal for MPs to be in receipt of government contracts. As the weekend wore on, and with a breach of privilege hearing looming, Key attempted to avoid prosecution by applying for the Chiltern Hundreds (the mechanism by which MPs resigned from the Commons).

A select committee was immediately convened to investigate the allegations. They discovered that Key’s firm held a contract to supply paper to the Stationery Office in 1831 and 1832, and that after his return as an MP the same contract was awarded nominally to his brother, Jonathan Muckleston Key, who lived in Gloucestershire. The committee discovered that despite sitting as an MP, Sir John Key continued to supply paper to the Stationery Office ‘delivered by his carts and servants’ while making all ‘communications from and to the [Stationery] Office’ in ‘his brother’s name’.

The committee’s findings over Key’s son proved equally embarrassing. It emerged that in July 1833 Key had written to the Prime Minister, Earl Grey, to ask for his son to be appointed as Storekeeper to the Stationery Office, which had a minimum age of 21. Key admitted to the select committee that he had deceived the secretary to the treasury, Charles Wood, by informing him that his eighteen-year old son, Kingsmill, was ‘about 22 years of age’. 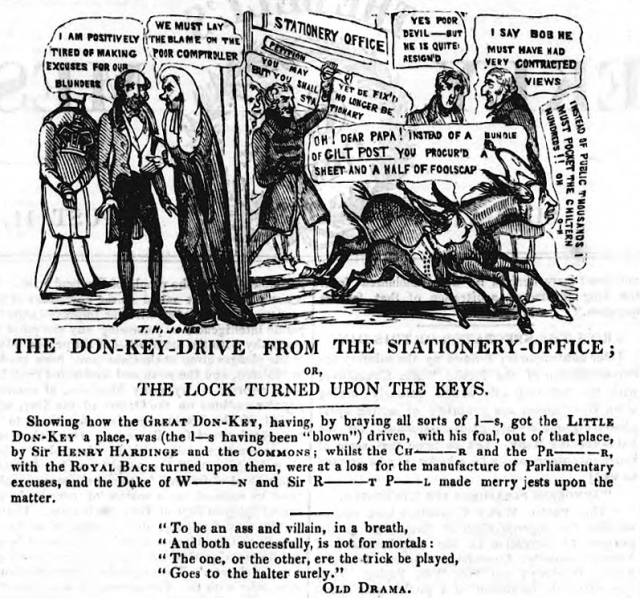 Key and his young ass escape their petitioners. Grey and Brougham (left) turn their backs on Key, while Peel and Wellington (right) revel in Key’s downfall: ‘The Don-Key Drive From the Stationary Office’, Bell’s New Weekly Messenger, 11 Aug. 1833

The government were further embarrassed by revelations that they had been aware of Key’s contract to supply paper to the Stationery Office, that Key had destroyed several pieces of correspondence with Wood and Grey ‘the day after the petitions against him were presented to the House of Commons’, and that Kingsmill had been required to inspect paper supplied to the Stationery Office by his father’s firm.

Key escaped prosecution for breach of privilege as he was no longer an MP, as did Kingsmill as he had resigned his position. Somehow Key defied further calls for his resignation as an alderman, and the Grey ministry resisted pressure to annul Key’s baronetcy. However, the episode proved incredibly damaging to the reputation of the government, whose radical and reformist supporters had hoped that the 1832 Reform Act would bring an end to such flagrant corruption. As the radical Poor Man’s Guardian opined, ‘the Donkey and his young asses’ had ‘combin[ed] with Grey to break the law and commit a robbery upon the state’.

For details about how to access the biographies of Key and other MPs being researched for the 1832-68 project, see here.

This entry was posted in Corruption, MP of the Month. Bookmark the permalink.

2 Responses to ‘The Donkey and his young asses’: stationery, corruption and the short-lived parliamentary career of Sir John Key (1794-1858)