From Rochdale to Westminster: Emily Kelsall and the new Houses of Parliament

This post from our assistant editor Dr Kathryn Rix was first published on the Parliamentary Archives: Inside the Act Room blog, which has many more articles to read on parliamentary history, from the medieval to the modern.

One of the more unusual items in the Parliamentary Archives is a silver trowel, used to lay the first stone of the Clock Tower in Charles Barry’s new Houses of Parliament on 28 September 1843. Now formally known as the Elizabeth Tower, but commonly referred to as Big Ben (after its Great Bell), the tower was completed in 1859. 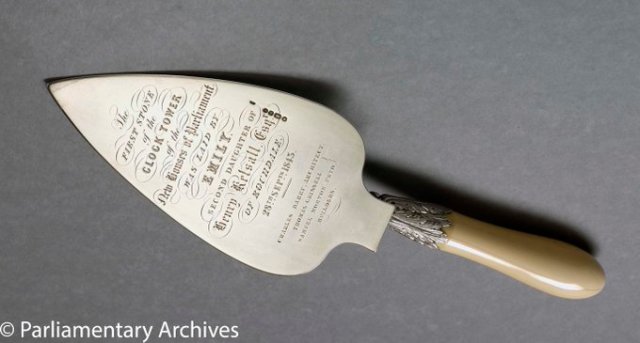 The trowel’s inscription states that the stone was laid by ‘Emily, second daughter of Henry Kelsall, Esqr. of Rochdale’. At a time when female access to Parliament was limited – women who wished to listen to debates were confined to the ‘ventilator’ before 1834 or the ladies’ gallery (nicknamed ‘the cage’) in later years – this is a fascinating souvenir of a woman who did not come from the aristocracy or the monarchy performing a ceremonial role at Westminster. Why was a woman from Rochdale, then a growing industrial town 170 miles from London, chosen for this task? 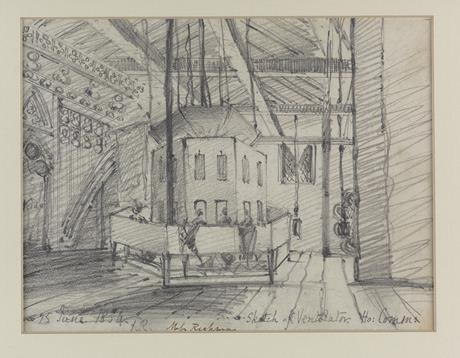 Sketch of the ventilator in St Stephens by Frances Rickman (1834), via http://www.parliament.uk/art (WOA 26)

Existing histories reveal little more than that Emily Kelsall was the sister-in-law of Samuel Morton Peto, whose name also features on the trowel as one of the builders, alongside those of his business partner Thomas Grissell, and Charles Barry as architect. The stone-laying apparently went unreported in the press, making it difficult to discover more about Emily’s role. However, from local and family histories, newspapers, census returns and other records, it has been possible to build up a picture of her life, revealing her to have been a formidable woman. One of her daughters wrote proudly that ‘the present Feminist movement has had its foundations well and truly laid in many parts of the country by such women as my mother’. 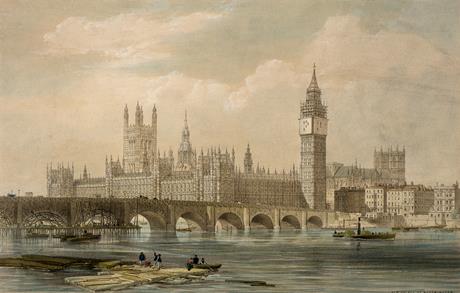 Perhaps the most surprising finding is that Emily was only 15 years old when she laid the Clock Tower’s first stone. She was born on 10 March 1828 at her parents’ home, Butts House, in the centre of Rochdale. Her father Henry Kelsall (1793-1869) originally came from Mottram in Longdendale, on the Derbyshire/Cheshire border, but was apprenticed to a relative in Rochdale, Jesse Ainsworth, a woollen manufacturer. With two of his brothers, Kelsall began his own business as a woollen manufacturer in Rochdale with ‘six pair of hand-looms and four [spinning] jennies’. He married Ainsworth’s daughter Lydia (1792-1875) in 1819, and they moved to Butts House around 1825. Kelsall and his brother-in-law William Bartlemore established their own mills, the first in 1835 and a second in the 1840s. By 1851 the firm, which specialised in flannel manufacture, was one of Rochdale’s major employers, with 798 workers. This enabled the family to enjoy a comfortable lifestyle. The Ainsworths and the Kelsalls were Baptists, and Kelsall was a generous benefactor to his faith. 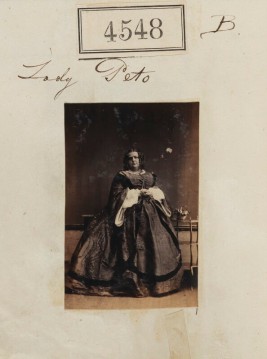 Emily was the third of five children. At the time of the 1841 census, aged 13, she was living in Rochdale with her parents, older brother and two younger sisters. The garden of Butts House went down to the river Roch and Emily recalled that they ‘had boats and used to catch fish’. Part of her education took place in London at Mrs. Broadbelt’s school for ‘daughters of gentlemen’ in Queen Square, Bloomsbury. In December 1842, while walking nearby, she and her older sister Sarah Ainsworth Kelsall (1821-92) had a chance encounter with Samuel Morton Peto (1809-89). Having sought her father’s permission to see her again, Peto subsequently asked Sarah to marry him. She was Peto’s second wife – he had been widowed in 1842 – and their wedding took place in Rochdale on 12 July 1843.

Emily laid the Clock Tower’s first stone just over two months later. This low-key ceremony echoed a similarly modest event on 27 April 1840, when Sarah Barry, the architect’s wife, laid the new Palace of Westminster’s very first stone, contrary to rumours that Queen Victoria would perform this task. Caroline Shenton has suggested that ‘worry about public opinion and personal reputations’ given the spiralling costs of the groundworks at Westminster may have been the reason why ‘no politician or official’ wanted to undertake this role. Such concerns applied equally in 1843, which probably explains why Peto’s young sister-in-law rather than a more prominent individual was given the honour. 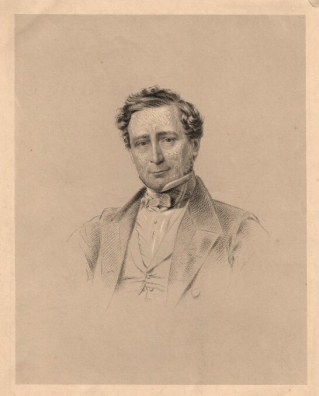 Emily’s life entered a new phase on 2 August 1848, when she married George Tawke Kemp (1810-77), a Spitalfields silk manufacturer, who originally came from Essex. Like the Kelsalls, Kemp was ‘an earnest and conscious’ Baptist. He was a founding member of Bloomsbury Baptist Church, opened in December 1848, which was constructed and funded by Peto (by then a Liberal MP), who had joined the Baptists after marrying Emily’s sister.

When the 1851 census was taken on 30 March, Emily, listed as a ‘lady’, was again at her parents’ Rochdale home, where Peto and her sister were also staying. Her husband was at 43 Tavistock Square, Bloomsbury, where Emily gave birth that August to their first child, Emily Jessie (1851-1900). Four more daughters followed: Ellen Constance (1852-1922), Susannah Florence (1856-1916), Lydia Peto (1858-1918) and Emily Georgiana (1860-1939). The youngest three were born in Rochdale, the family’s main residence from 1856, when George became a partner in his father-in-law’s business, known thereafter as Kelsall & Kemp. He was also a partner in the silk manufacturing firm of Kemp, Stone & Company, based nearby at Middleton.

The family built ‘a beautiful residence’, Beechwood, on Manchester Road, Rochdale, moving there in 1860. Emily and George’s last child, George, was born in 1866. Remembering their upbringing, one of their daughters noted that ‘our parents were both anxious that we should be good linguists, so we all learned French from a very early age, then German and Italian, but, I regret to say it, not Latin – it being still considered unnecessary for girls’. In 1871 the family’s seven servants at Beechwood included a Swiss governess. Emily gave her children Bible lessons on Sundays, and they also studied music, painting and dancing, although ‘the greatest attention was devoted to history’. 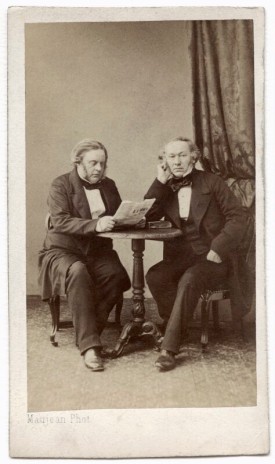 The Kelsalls and Kemps took a keen interest in politics and numbered the leading Radicals John Bright and Richard Cobden among their ‘intimate friends’. George Kemp was one of the representatives of Lancashire’s silk and woollen industries who visited Paris to assist Cobden’s negotiations of the Anglo-French commercial treaty of 1860, and the family hosted Cobden at Beechwood on his final visit to his Rochdale constituency in November 1864. Emily’s father and husband were both magistrates, and Henry Kelsall was at one point mooted as a parliamentary candidate. George Kemp, ‘a good public speaker’, was briefly a member of Rochdale’s town council. The Kemps were well-travelled, visiting Germany, France, Austria, Switzerland, Corsica, Italy and Algeria. Emily went abroad every year for over 40 years.

In 1877 she accompanied her husband to Egypt, where he hoped the climate would improve his health, but he died there that March. He left an estate valued at £160,000 (equivalent to around £10 million today). Following his death, and that of his managing partner, Joshua Heap, in 1886, Emily and her nephew took over the management of the business, even though she was by then profoundly deaf. She was described as ‘a woman of the keenest business judgment’.

She was also remembered for her ‘fine character and quietly dispensed philanthropy’, particularly to Rochdale’s poor. Alongside her support for Baptist organisations, she was responsible for several other local projects, including mothers’ meetings, a lads’ club and a nurse for the poor. In 1879 she rented a property in Rochdale to provide ‘respectable lodgings’ for women who would otherwise be homeless. She also funded the building of the Three Cups Coffee Tavern in Sudden, a temperance establishment. One local history urged parents to ‘bid their daughters look, and take from her examples of their future life’. 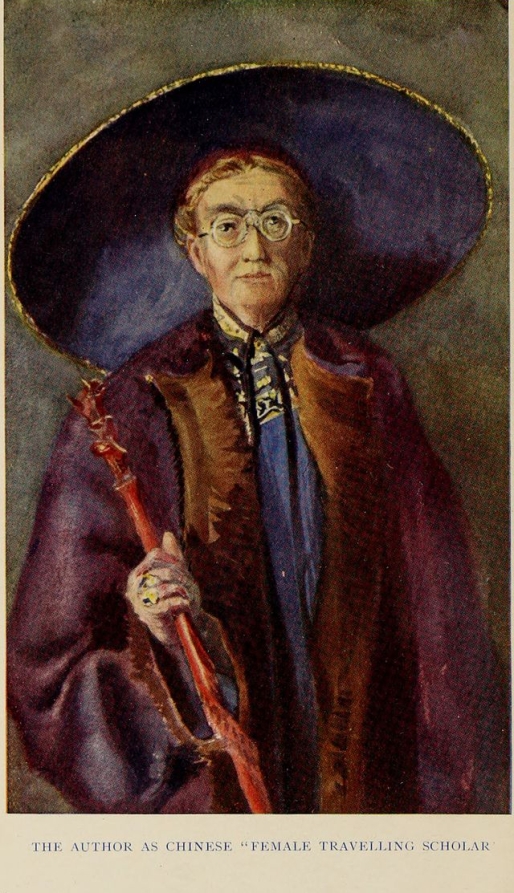 Emily Georgiana Kemp, self-portrait from The Face of China (1909)

Her own daughters certainly took inspiration from her. Two of them, Emily Jessie and Susannah Florence, became Baptist missionaries, working mainly in China. In July 1900 Emily Jessie, her husband Thomas Wellesley Pigott and their son were among 44 missionaries and their families publicly beheaded during the anti-foreign and anti-Christian Boxer rebellion. Emily’s youngest daughter, Emily Georgiana, was one of the first generation of students at Somerville College, Oxford, and also attended the Slade School of Fine Art. Like her parents, she was well-travelled, publishing accounts of her visits to China, Korea and Central Asia. She funded the construction of Somerville College chapel, opened in 1935.

Emily’s son George (1866-1945) was elected in 1895 as Liberal Unionist MP for Heywood. He was re-elected in his absence in 1900, while serving in South Africa during the Boer War. His sisters Ellen and Lydia addressed meetings in his support during the contest. His commitment to free trade prompted him to join the Liberals in 1904, when he became prospective candidate for Middleton. However, the demands of business meant that he did not stand there in 1906. 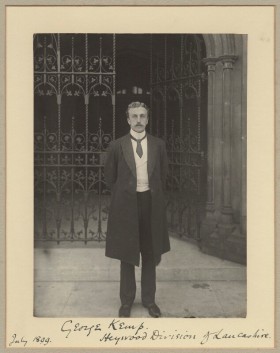 In January 1910 he won North-West Manchester as a Liberal, and was re-elected that December, defeating the future Conservative prime minister Andrew Bonar Law. Declaring that he ‘loathed politics’, in August 1912 he resigned his seat over the Liberal ministry’s home rule bill and re-entered the Conservative fold. He was knighted in 1909 and created Baron Rochdale in 1913. Among the causes he promoted in Parliament was women’s suffrage, arguing when he moved the second reading of the women’s enfranchisement bill, 5 May 1911, that ‘the nation suffers a loss by the exclusion of capable women from the power to select Members of Parliament’.

Emily did not live to see her son advocate the rights of ‘capable women’. She died aged 72 at the Lord Warden Hotel, Dover, on 2 December 1904, from acute bronchitis and asthma. She had been taken ill en route to Bordighera, Italy, where she had spent every winter for the last few years of her life. She left an estate valued at £27,399 11s. 5d., from which she bequeathed £500 each to the Baptist Missionary Society and its Ladies’ Association. She was buried at Rochdale cemetery, with her coffin being transported on a lorry from Kelsall & Kemp’s factory, fittingly draped in white flannel.

4 Responses to From Rochdale to Westminster: Emily Kelsall and the new Houses of Parliament