‘The power of returning our members will henceforth be in our own hands’: parliamentary reform and its impact on Exeter, 1820-1868

This week Dr Martin Spychal, research fellow for the Commons 1832-68, uses polling and voter registration data to explore the 1832 Reform Act’s impact on elections in Exeter. This blog was originally published on the History of Parliament blog as part of our Local and Community History Month focus on the historic constituency of Exeter. 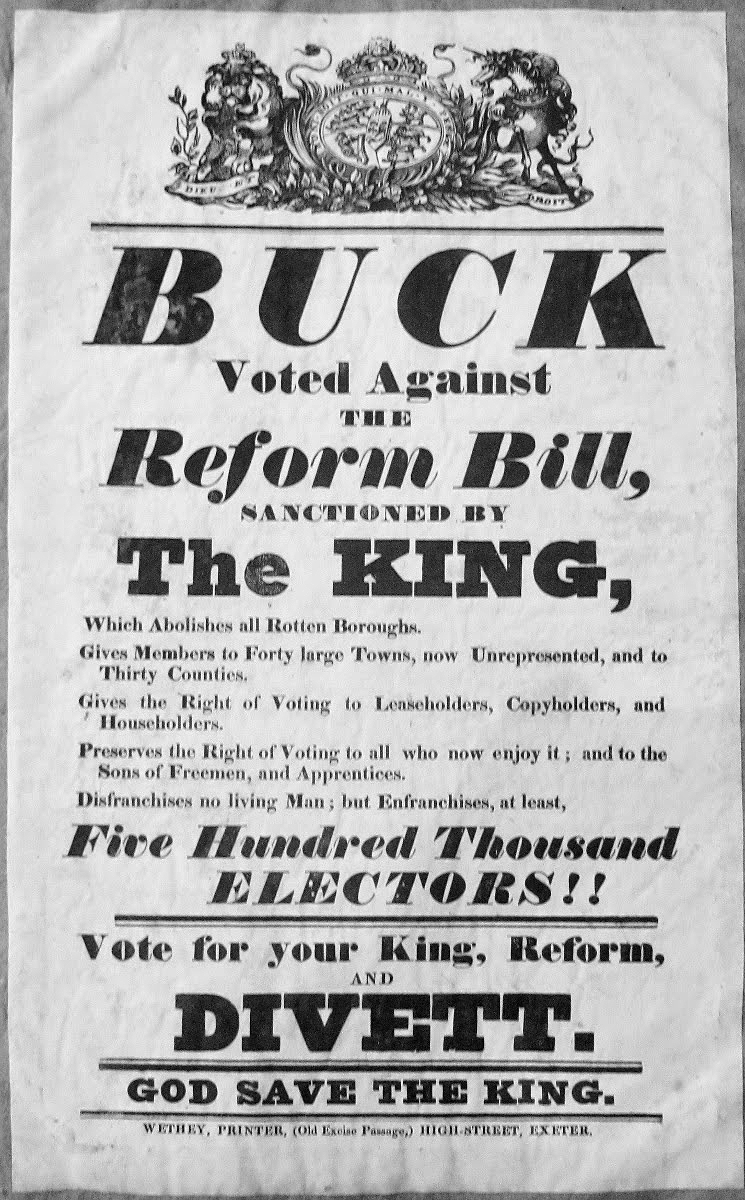 A handbill for the unsuccessful pro-reform candidate at the 1831 general election, Edward Divett. Exeter’s Whigs, Reformers and Liberals looked to parliamentary reform as the only way to eradicate ‘church and chamber’ influence. © Devon Heritage Centre

Exeter Cathedral and the city’s long history of loyalty to the crown loomed large over its politics during the 1820s. To be returned for one of Exeter’s two seats in the Commons, whether as a Whig or as a Tory, candidates had to secure the confidence of the Anglican-controlled council chamber, the cathedral and the parish clergy. The political influence of ‘church and chamber’, as it was known locally, was apparent even to the most casual of onlookers. At the 1820 election, for instance, the mayor of Exeter ran the Tory candidate’s campaign and in 1830 the incumbent liberal-Tory was forced to retire after his vote for Catholic emancipation incensed the dean and chapter of Exeter Cathedral.

This state of affairs was not to everyone’s liking, particularly Exeter’s smaller tradesmen and shopkeepers who predominated in the city’s Baptist, Quaker, Methodist, Unitarian and Catholic chapels, as well as its synagogue. Their collective efforts during the 1820s to return a MP for the city proved fruitless, meaning that as the decade wore on parliamentary reform was seen as the only means of shifting power in the city. As the Liberal Western Times, and its outspoken editor, Thomas Latimer, protested in 1831, church and chamber used their joint influence in Exeter ‘as much as is exercised in a rotten borough’.

It therefore came as little surprise that the anti-Church and council faction of Whigs, Liberals and Reformers celebrated the 1832 Reform Act as the dawning of a new era. This optimism appeared to be confirmed when two Whig-Liberal candidates were returned at the 1832 election, prompting the Western Times to declare that ‘the power of returning our members will henceforth be in our own hands’.

This Liberal confidence proved short-lived. In 1835 Exeter’s Conservatives regained one of the borough’s two seats. From then on it was the Conservatives, rather than the Liberals that came closest to assuming complete control of the borough. Exeter’s Liberal MP narrowly avoided losing his seat at the 1841 and 1852 elections, and a second Liberal candidate was roundly trounced at two by-elections in the 1840s. And for a brief period, following the 1864 by-election, the Conservatives returned both of Exeter’s members. The retirement of an incumbent Conservative ahead of the 1865 election led to the unopposed return of a Liberal and Conservative in 1865. 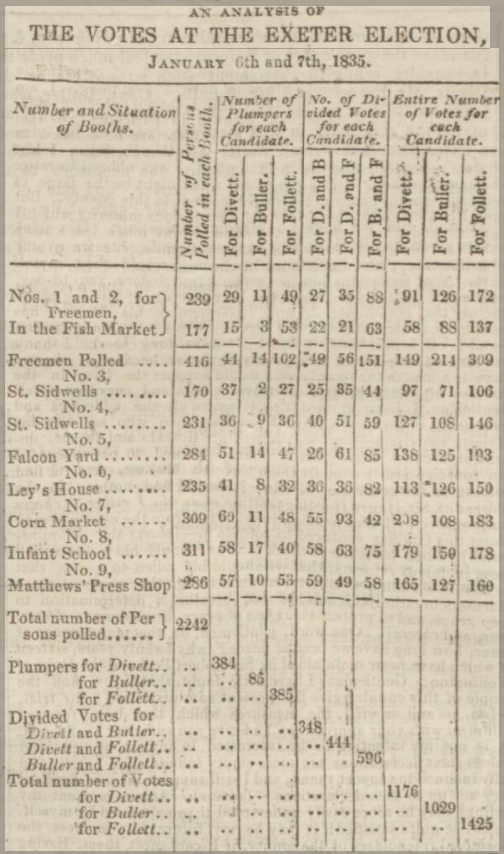 Due to the complex changes to voting rights and extensive boundary reforms that took place in Exeter in 1832, the constituency provides an excellent case study of the unintended consequences of the 1832 Reform Act. As well as revealing the continuation of ‘ancient’ freeman and freeholder voting rights in the reformed electoral system, the constituency offers some stark examples of how, in the long run, the finer details of the 1832 Reform Act actually proved favourable to Conservative candidates.

The rules surrounding who could vote in Exeter after 1832 were some of the most complex in the country. The borough’s ancient freeman qualification continued to enfranchise freemen of the borough who lived within seven miles of Exeter Guildhall, and had been entitled to vote on 1 March 1831 or had become freemen ‘by birth or servitude’ since then. As Exeter had the administrative status of a county, all men who owned a 40s. freehold within its newly extended parliamentary limits also qualified to vote, so long as the freeholder’s primary residence was within seven miles of Exeter’s new boundaries. In addition, all men who occupied a house with an annual rental value of £10, and who were not in arrears on their parish rates for the previous twelve months, were enfranchised by the 1832 Reform Act.

To make matters more complicated Exeter’s list of registered voters was pored over each year by party lawyers who sought to disfranchise their opponents’ supporters for all manner of technical reasons in the annual registration court. As with many other constituencies across England, in Exeter it was the Conservative lawyers and election agents who proved most adept and ruthless at removing their opponents from the rolls.

Exeter’s ancient rights freeman and freeholder franchises comprised a significant portion of Exeter’s voters after 1832, while the freeholder voters continued to grow in number after the 1867 Reform Act © Martin Spychal

One of the technicalities raised consistently in Exeter’s registration court related to the annual 1s. voter registration fee introduced by the 1832 Reform Act. While it was clear that all £10 householders had to pay this fee, ancient rights freemen and freeholders successfully challenged parish officials and revising barristers throughout the 1830s to secure an exemption from the annual charge.

The lack of a 1s. registration fee for this group meant that the freeholder franchise, in particular, continued to grow in popularity after the 1832 Reform Act, and even continued to do so following the 1867 Reform Act. In 1835 833 voters were registered under Exeter’s freeholder qualification, by 1865 that figure had increased to 1013, and by 1881 it had risen to 1181.

By contrast, Exeter’s ancient freemen declined in number from 586 in 1832 to 224 in 1865. At every election during this period, polling data revealed that at least 70% of freemen supported Conservative candidates. This led to constant complaints from Liberals that Exeter’s freemen were propping up ‘church and council’ influence in the borough, as they had done before 1832.

In reality, however, the votes of freemen on their own only swayed one election to the Conservatives between 1832 and 1868 – the 1864 by-election. Exeter’s polling data actually reveals that Conservative candidates enjoyed consistently high levels of support among the more popular freeholder and £10 householder franchises, a majority of whom voted for Conservative candidates at the three-way contests of 1835, 1841 and 1852, whether by splitting with the Liberal candidate or casting a partisan plump or straight votes.

As well as franchise changes, in 1832 Exeter’s boundaries were extended to include the parishes of St Leonard, St Thomas and Heavitree. At the time, these changes were welcomed by Whigs, Reformers and Liberals, and opposed by the forces of Exeter Conservatism, who unsuccessfully petitioned the House of Lords against the ‘great injustice’ of the boundary commissioners’ proposals.

However, polling data for each of the contested elections between 1832 and 1868 reveals that these initial Conservative fears were misplaced. While around 60% of voters in St Thomas supported Liberal candidates throughout the period, voters in Heavitree and St Leonards proved consistently pro-Conservative from 1835. This meant that if Exeter’s boundaries had remained unchanged in 1832 as the Conservatives had wanted, Liberal candidates would have performed better – topping the poll at the 1852 election and winning the 1864 by-election.

The next major change to Exeter’s electoral conditions came with the 1867 Reform Act, when the franchise was extended to include all male householders. As in 1832, Exeter’s Liberals again looked to reform as the best means of finally toppling the influence of ‘church and chamber’. As in 1832, Liberal candidates secured both seats at the 1868 election. However, the Liberal’s triumph again proved short-lived. At the 1874 election the enduring popularity of Conservatism among Exeter’s electors ensured the return of two Conservative candidates at the first general election after the introduction of the secret ballot.

Martin Spychal, ‘The representation of Devon and Cornwall after reform, 1832-68’, Victorian Commons (2019)

2 Responses to ‘The power of returning our members will henceforth be in our own hands’: parliamentary reform and its impact on Exeter, 1820-1868