‘Unpopular only with people who made no allowance for eccentricity’: Henry Bulwer (1801-72), the diplomat MP

Our MP of the Month is Sir Henry Bulwer, best known as a controversial and colourful career diplomat. In this guest post, Dr Laurence Guymer, who has published extensively on Bulwer’s diplomatic career, explores how this intersected with his time in Parliament.

Born in 1801, Bulwer attended Harrow before going up to Trinity College, Cambridge. He was not at Trinity for long; finding it too academic, he moved to Downing. In the 1820s, Bulwer squandered the fortune he had inherited from his grandmother. He gambled at White’s and Almack’s and surrounded himself with actresses, dancers and estranged wives of rich men. After spending time in Greece during the War of Independence, he realised that he needed to take up some regular profession, and became an officer in the First Life Guards. He soon discovered, however, that his habits were not suited to the punctuality and discipline of a soldier. In 1826, and by now an aspiring writer, Bulwer published a collection of letters he had written in Greece. One particular admirer was the future Prime Minister, William Lamb (later Viscount Melbourne). Lamb endorsed Bulwer as a candidate for Hertford at that year’s general election, a contest he lost, despite support from the Cecil family at Hatfield House.

In 1830, Bulwer made an arrangement with the Earl of Pembroke for a seat in Parliament for the pocket borough of Wilton. Bulwer ‘like[d]’ being an MP ‘very much’, finding it ‘a regular & very amusing occupation.’ His role models were the Lord Chancellor, Henry Brougham, and the Lord Privy Seal, the Earl of Durham, who were appropriately radical, and who had political and personal affinity with former Canningites like Viscounts Palmerston and Melbourne. Brougham had launched The Edinburgh Review, a Whig party organ that attacked aristocratic government, to which Bulwer contributed articles.

Bulwer did not, however, identify with any one political grouping inside Parliament. He enjoyed spending time socially with the Cecils and the Walpoles, but considered the Tory party ‘extreme and prejudiced on almost all questions’. He felt the ‘greatest admiration for Sir Robert Peel’s superior abilities’, but could not sit with his supporters. He was often at Holland House, the centre of Foxite Whiggery, but saw the Whigs as ‘not only a purely aristocratic party, but a purely aristocratic clique, which never admitted anyone within its circle without dislike or disgust’. By spring 1830 he was a dining companion of the young novelist and future Prime Minister Benjamin Disraeli. During the 1830s a sort of Norfolk-Hertfordshire Radical-Tory axis was formed between Bulwer; his younger brother, the novelist, Edward Bulwer Lytton; the second Marquess of Salisbury (a connection by marriage); Disraeli; and the Earl of Orford (brother of Disraeli’s mistress).

Bulwer tried to establish a reputation as a radical. He voted for the total abolition of the corn laws and also pressed for a Jewish disabilities bill and a representative assembly in New South Wales. He considered political reform necessary because it was

‘absurd that the great towns of Manchester and Birmingham should not elect members to sit in parliament, while some ruined old castle or dilapidated village did so’.

Yet Bulwer’s advocacy of reform was based more on common sense (that it would act as a safety valve for the country) than on radical principles. Like many of his contemporaries, he feared that the 1832 Reform Act might lead to further, more dangerous, reform.

Bulwer combined his career in Parliament with diplomatic missions. He spent time at the Legation in Berlin, and then in Vienna and the Hague, where he gained attention for his reports on the Belgian revolt. In 1831, he was elected for Coventry as an advanced Reformer. His victory was largely the result of the Whig party manager hiring a gang of ruffians to keep Tory voters away from the hustings. The following year, Bulwer was appointed attaché at Paris. Palmerston softened the ambassador’s objections by arguing that Bulwer would ‘annoy you but little’. The Foreign Secretary had been impressed with Bulwer’s speeches in the Commons, ‘put together’, he believed, ‘with great industry & some cleverness’.

Bulwer had been re-elected for Coventry in 1832, but his alienation from the two main parties led to him standing instead at Marylebone in 1835 as an independent candidate. Despite his distaste for the Whigs, Bulwer accepted the need for a compromise between them and the Radicals in order to present a united front against the Conservatives. To help achieve this union, Bulwer wrote a pamphlet during Peel’s short-lived ministry and supported fully the Lichfield House Compact.

But he largely played at being a politician, choosing to do as little work as possible, and getting by with his likeability in society. He did not dash from committee room to committee room and often missed important divisions. He had even missed the vote on the second reading of the Reform Bill. Bulwer’s attachment to Disraeli did little to improve his worsening reputation. During the Taunton by-election in 1835, Disraeli’s Whig opponents attempted to sabotage his campaign by revealing that he was a member of the radical Westminster Reform Club who had been nominated by Bulwer. Disraeli and Bulwer were seen as turncoats. However, this did not affect Bulwer’s diplomatic prospects, for he still had the support of Melbourne and Palmerston on the Whig side, and Peel and the Earl of Aberdeen on the Conservative. 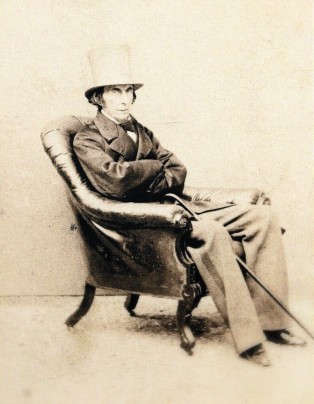 Henry Bulwer as ambassador at Constantinople in the 1860s

On his return to Britain in 1837, Bulwer committed himself to his parliamentary duties, but chose not to contest Marylebone at that year’s general election. He later claimed that this was because neither party shared his opinions on the corn laws or the Irish Church. It is more likely, however, that it was because of differences with an influential portion of the electors of Marylebone. Furthermore, Bulwer had finally decided to dedicate himself fully to diplomacy. Palmerston sent him to Constantinople to assist the ambassador with a commercial treaty. Twenty years later, Bulwer finally reached the height of his career when, having served in Spain, Italy and America, the Earl of Malmesbury appointed him ambassador to the Sublime Porte.

After being recalled from Constantinople in 1865, Bulwer re-entered British politics. In 1868, he was elected as Liberal MP for Peel’s old seat, Tamworth. His health was failing, his name was synonymous with intrigue and corruption, and he was bitter against the Foreign Office. Almost his last speech in the Commons was on the disestablishment of the Irish church, which he endorsed. His friends considered it one of the best speeches on the question, but owing to Bulwer’s weak voice, barely anyone in the chamber could hear it.

Bulwer was raised to the peerage as Baron Dalling and Bulwer in 1871. It was reported that he had been elevated to the Lords because he was about to give a pro-French speech just before the Franco-Prussian War. The Prime Minister (Gladstone) wished to remain on good terms with Bismarck, so offered Bulwer a peerage to hold his tongue. Bulwer kept quiet, but did not have long to enjoy his status as a peer. He died suddenly in Naples in May 1872. Bulwer’s good friend, Sir Henry Drummond Wolff, wrote of him: ‘There is no doubt that he was a most remarkable man … unpopular only with people who made no allowance for eccentricity’.