Over the past few years, we have highlighted several MPs who, quite apart from their involvement in parliamentary debates and legislation, had a significant personal role in the development of the infrastructure of Victorian Britain. Previous MPs of the Month have included the leading railway engineer Joseph Locke, the pioneering telegraph engineer Charles Tilston Bright and John Treeby, who helped to build London’s first underground railway.

This month we focus on the career of Sir Peter Hesketh-Fleetwood (1801-66), MP for Preston, 1832-47, who developed not only a railway, but an entire town: the seaport and resort of Fleetwood on the Lancashire coast. Having toyed with calling it New Liverpool or Wyreton, he instead gave it his own family name. Born Peter Hesketh in 1801, he had added the surname Fleetwood to his own in 1831 to mark his descent from that family, whose estates he inherited on his father’s death in 1824. Hesketh-Fleetwood’s great-grandfather Roger Hesketh had married Margaret Fleetwood in 1733, uniting two long-established Lancashire families and their extensive landed properties. These included an estate at Rossall, where the Fleetwoods had lived since the seventeenth century. 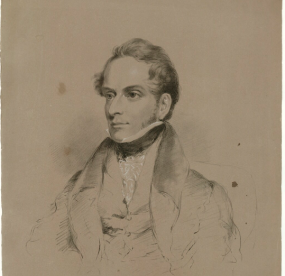 Realising the potential of railway transport, and inspired by a stay at St Leonards-on-Sea in Sussex, where he befriended the architect Decimus Burton, Hesketh-Fleetwood decided in the early 1830s to create his own seaside resort for Lancashire’s working classes. He chose a site on his Rossall estate at the mouth of the river Wyre, formerly home only to a rabbit warren. He also wanted the new town of Fleetwood, one of the first towns to be planned around a railway, to provide year-round employment as a port. He chaired a meeting at Preston in October 1834 at which the Preston and Wyre railway, whose costs were estimated at £120,000, was initiated. Construction of Fleetwood’s buildings, designed by Burton, began in 1836, when Hesketh-Fleetwood laid the first stone, and the railway opened in July 1840.

Hesketh-Fleetwood had, meanwhile, been elected as MP for the nearby borough of Preston, 17 miles from his home at Rossall Hall, and took advantage of his position in Parliament to promote the railway bills needed for Fleetwood’s development.  He provides another good example of a phenomenon we have explored before in our blogs: the fluid and shifting political loyalties of MPs, who often played up their ‘independence’ from party. Standing for the first time in 1832, he insisted that he was ‘unconnected with any political party’, and although his victory in the poll owed much to moderate Tory support, he also won a considerable number of Liberal votes as a popular local landowner. At Westminster he was ‘never considered a very warm Tory’ and was happy to enter the division lobbies to vote alongside Radical MPs on matters such as replacing the corn laws with a fixed duty on corn and shortening the length of parliaments.

Despite this, it was clear at the time of the 1835 election that Hesketh-Fleetwood’s loyalties lay with the new Conservative ministry headed by Sir Robert Peel. He even offered Peel the assistance of his private secretary, Charles Dod, best known as the compiler of Dod’s parliamentary companion, whose knowledge of candidates might be useful for election purposes. (Peel politely declined the offer.) Although he supported the Peel ministry in important divisions on the speakership and the address in February 1835, Hesketh-Fleetwood was absent from the critical vote on the Irish church which brought the ministry down that April. His subsequent votes in the Commons reflected his growing distance from the Conservative party.

When he sought re-election for Preston at the 1837 election, he emphasised his ‘independent support’ for the Melbourne ministry’s ‘liberal measures and principles’. Having cemented his new political loyalties with his votes in the 1838 session, he was rewarded with a baronetcy in June 1838 and presented at court by Melbourne the following month. In June 1839, in his most significant parliamentary speech, he moved to enlarge the electorate by extending the £10 household franchise given to borough constituencies in 1832 to county seats as well, but was defeated by 207 votes to 81. At the next general election, in 1841, he openly declared his support for Liberalism and stood for the first time on a joint ticket with another Liberal candidate, Sir George Strickland. Both men secured an endorsement from Preston’s Chartists.

It was not, however, his shifting party allegiance which had the greatest influence on Hesketh-Fleetwood’s political career, but the spiralling costs of developing Fleetwood. These drained his financial resources and ultimately prompted his retirement from Parliament. He was responsible for all the expense of building the town – said to be over £100,000 – and half the costs of the railway, which totalled almost £200,000 more than originally projected. His position was made worse by having entrusted much of the management of his affairs at Fleetwood to an unreliable agent. Another blow came with the opening of a new rail route to Scotland, which undermined Fleetwood’s prospects as a port.

During the 1840s Hesketh-Fleetwood therefore gradually sold off ‘first one ancestral estate and then another’ to shore up his financial position. In 1844 he gave up his residence at Rossall Hall and leased it to the Northern Church of England School, which eventually bought the property. Although he claimed that his finances were on a firmer footing by 1847, he decided not to undergo the expense of a contest at that year’s general election. He continued to sell off various properties, including the North Euston Hotel at Fleetwood, during the 1850s. He spent some time living in Spain, where his Spanish second wife secured a small allowance from the king. Although he was briefly in the field as a prospective Liberal candidate for Preston in 1861-2, he abandoned this due to ill health. He died in 1866, having lost most of the family fortune. His contemporaries marked his role in Fleetwood’s development by building schools there in his honour; more recently his contribution has been recognised by a statue, unveiled in 2018.