The representation of Devon and Cornwall after reform, 1832-68

Last week the History of Parliament and the Devon and Cornwall Record Society hosted a conference at Exeter on ‘The South West and Parliament’. Dr Martin Spychal of the Victorian Commons spoke at the event, and today provides an overview of the electoral system and political affiliation in both counties between 1832 and 1868.

England’s southernmost counties, Devon and Cornwall, suffered an inauspicious start to the post-reform era. Prior to 1832 Cornwall had been the home of many rotten boroughs and so it saw its representation slashed from 42 to 14 MPs by the 1832 Reform Act. This was the highest rate of disfranchisement among English counties by some margin. Devon, which also fared badly, saw its representation reduced from 32 to 22 MPs.

Electoral politics played out in both counties from 1832 in a remarkably complex constituency system that saw the introduction of a new system of voter registration. Every borough except Tiverton underwent boundary changes in 1832, in addition to the introduction of the new £10 voter, who was enfranchised alongside those already qualified under permitted ancient franchises. Both counties were divided into two brand new double-member electoral districts and saw new occupier and leaseholder voting qualifications added to the traditional 40 shilling freeholder franchise.

The rise in enfranchisement rates in 1835 on the graph above was caused by the registration drive that followed that year’s general election. The general decrease in adult male registration over the following 30 years was prompted by the expiration of ancient franchise qualifications, a tapering off of enthusiasm for registration and a slight increase in the percentage of adult males in the total population. The big spike in 1868 reflects the introduction of the borough householder franchise at the 1868 election.

In keeping with the rest of the UK, both counties retained a vibrant electoral culture after 1832, which provided opportunities for female and male non-electors to participate in constituency politics. Traditional canvassing practices continued after 1832 under the guidance of local party officials, who were on constant alert between elections on account of the annual registration courts. Landlord influence also persisted in a handful of boroughs such as Launceston and Ashburton. The treating of electors with food or drink remained commonplace, and the shady practice of bribery continued to play a role in many constituencies. As previous blogs have shown, when allegations could be proved Parliament often punished cases of bribery, either via the unseating of MPs (such as Charles John Mare at Plymouth), or via disfranchisement (a fate that befell Totnes in 1867).

As in previous periods, the boisterous and noisy nomination continued to precede the election of a member or the announcement of a poll. The length of a poll, however, was reduced to two days in 1832 (this was reduced to a single day in the boroughs in 1835, and the counties in 1853). After the declaration, successful candidates were then chaired in a procession throughout the town or city that hosted the constituency’s election, as was the case at the 1849 Devonshire South by-election in Exeter pictured below. Newly elected MPs were then deposited at the local pub for an election dinner that usually went on into the early hours.

At each election between 1832 and 1865 both counties tended to return a higher percentage of MPs willing to support Whig-Liberal governments than the English average. Devon was well ahead of the English average until 1852, and always returned a majority of Whigs, Liberals, Reformers and Radicals (and in 1847 and 1852 Liberal Conservatives) combined. A remarkable 95% of Devon’s MPs fell into this category in 1832. However, by 1841 the superior organisation of the Conservatives and a tiring Whig reform agenda combined to drive Whig-Liberal support down to their lowest levels in both counties. 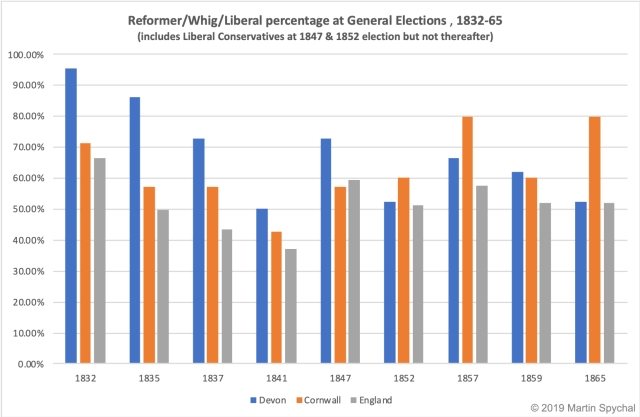 From 1852 Devon as a whole followed national swings quite closely. Cornwall, however, saw a huge surge in Whig-Liberalism after 1857. As Professor Edwin Jaggard has argued, this can be accounted for by the strength of Dissent in the county (70% of religious worshippers were Nonconformists); the increasing acceptance among larger portions of the electorate of a new type of ‘modern’ politics in the boroughs; and a Liberal party that was outsmarting the Conservatives in terms of organisation by the latter 1850s.

These electoral swings were reflected quite closely in the voting patterns of Cornish and Devon MPs at Parliament. As part of the work for my forthcoming book, I’ve been developing the History of Parliament’s new database of parliamentary votes between 1836 and 1910 to chart the behaviour of groupings of MPs in the division lobbies at Westminster. The graph below provides a brief taster of this work. It details the incidence of Whig-Liberal support among Devon and Cornish MPs in major confidence votes between 1838 and 1868, in comparison with the UK average. The percentages on the chart only account for those present at votes, not those absent, and in future blogs I’ll consider the different ways that ‘voting support’ for particular issues might be presented.

Nevertheless, this data suggests that both county’s MPs stuck quite closely to their electioneering party labels in major votes throughout the period. Devon’s MPs were consistently more Liberal than Cornish MPs until 1852, following which Cornish representatives swung heavily towards a Palmerston-led Whig-Liberal administration. This was in contrast to Devon, whose MPs proved remarkably lukewarm over the MP for Tiverton’s premiership. By the end of the period Cornwall’s Liberal ascendancy in the Commons was confirmed as it remained strongly pro-Gladstone. Apart from the period between 1852 and 1858, when Russell, Aberdeen and Palmerston were splitting Whig-Liberal loyalties, Cornwall and Devon’s MPs were consistently more Liberal in major divisions and confidence votes than the UK average.

For details of how to access the MP biographies and constituency articles for Devon and Cornwall already completed by the 1832-68 project please click here.

Edwin Jaggard, Cornwall Politics in the Age of Reform (1999)

5 Responses to The representation of Devon and Cornwall after reform, 1832-68