The Victorian Commons, as some of our recent blogs have shown, was an important testing ground for many of the practices and parliamentary procedures that remain in place today. It also provides early examples of MPs having to grapple with many of the dilemmas that still face modern representatives. With the two party system becoming far more entrenched and new constituency pressures emerging after 1832, MPs increasingly found themselves having to make difficult choices between conscience and party, or conscience and constituency. Even low-profile backbenchers, who desperately tried to keep out of the spotlight, were unable to escape these uncomfortable ‘crossing the Rubicon’ moments. 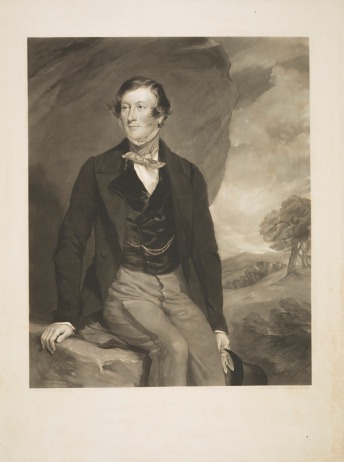 One MP who very publicly found himself caught up in a crisis of conscience versus constituency was Henry Charles Sturt (1795-1866). A friend of the Conservative prime minister Sir Robert Peel, whom he had fagged for at Harrow, Sturt had been parachuted into the unreformed Commons by his aristocratic family aged just 21 in 1817, sitting for their pocket borough of Bridport. He quit in 1820, to pursue his growing passions for science, archaeology and agriculture, but in 1830 served another short spell as an MP for Dorset.

In 1835 Sturt was re-elected for Dorset as a replacement for William Bankes, who had been implicated in a homosexual scandal. Sturt stood as a supporter of Peel’s short-lived Conservative ministry. More importantly, as a leading member of the county’s agricultural societies and a pioneer of ‘model cottages’ for his tenants, he went to Parliament with the backing of the county’s farmers. He had no problem getting elected again in 1837 and 1841, when he claimed to have ‘been elected by an agricultural constituency on a full understanding that he would support the corn laws’.

This didn’t stop him controversially backing Peel’s modification of the corn laws in 1842, widely seen as a first step towards the removal of the protective tariffs enjoyed by farmers. When Peel proposed to completely repeal the corn laws in 1846, however, Sturt found himself in a quandary. He initially promised ‘to stand by the present protection to agriculture’ and was listed as a firm supporter of the corn laws. Privately convinced by Peel’s arguments in support of free trade, however, he was forced to admit that he had ‘changed his opinion’ and could no longer in conscience support such a law. The Protectionist press demanded that he stand by his constituents and election promises. Finding his position untenable, Sturt resigned.

Accused of lacking the moral courage to stand up to Peel, and of ‘leaving his constituents in the lurch’, Sturt found himself the object of widespread derision. One critic warned him to sell his Dorsetshire estates and flee to France. He even ended up in a popular song about those who remained loyal to their constituents:

The Somerset squires may at Acland throw dirt,

And Dorsetshire farmers may grumble at Sturt,

But I never rat and I ought to be prized,

For a vote, though it’s silent, should ne’er be despised

Later, writing to Peel, who had desperately tried to persuade him not to resign, Sturt offered a mild but ‘telling’ reproach to his leader and friend. ‘My only criticism of your present measure’, he told the prime minister, ‘shall be very gentle – whether it might not have been managed without stranding others and myself’.

To see how to access the full biography of Sturt and other MPs in our 1832-68 project please click here.