Corruption at elections in Britain in the 19th century

Following on from Martin Spychal’s blog about the paper he gave at last month’s ‘From “Old Corruption” to the New Corruption?’ conference, organised jointly by Oxford Brookes and Newman Universities, we hear from our assistant editor Kathryn Rix. She gave the conference keynote, looking at parliamentary efforts to tackle the problem of electoral corruption in the nineteenth century. 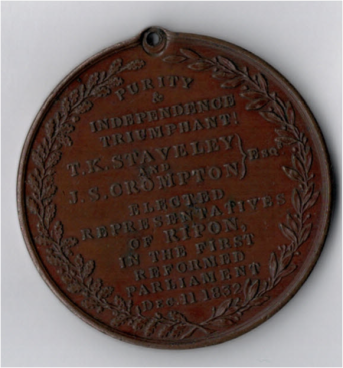 In December 1832 voters in the Yorkshire borough of Ripon went to the poll for the first time in more than a century. The victory of the Reformers Thomas Staveley and Joshua Crompton over their two Conservative rivals was commemorated with a medal, depicting ‘The genius of patriotism driving corruption from the constitution’ and bearing the inscription ‘Purity and independence triumphant!’ In other constituencies, too, hopes were expressed that the 1832 Reform Act would mark the beginning of a new era of electoral probity.

By disfranchising notorious rotten boroughs such as Dunwich, Gatton, Old Sarum and around 50 more, the 1832 Act had done much to clean up the electoral system. The redistribution of seats, in combination with the extension of the franchise, helped to put paid to the trade of the boroughmonger. The Act also made practical changes which diminished the corruption and expense of elections, most notably by limiting the duration of the polling to two days. This was cut further to one day in boroughs from 1835 and in counties from 1853. The Radical MP for Wigan, Richard Potter, praised this subsequent reform for its potential to curb bribery, since ‘the mischief under the old system was generally done in the night’. A shorter poll also reduced the opportunities for treating – the provision of food and drink – and for intimidation of voters.

However, the electoral system after 1832 was far from pure. In 1836 the London and Westminster Review bemoaned the fact that while the Reform Act was still in its cradle, ‘already … has the envious goddess of Corruption sent two most deadly serpents, Bribery and Intimidation, to strangle the baby-giant’, with the result that ‘the representative system is utterly defeated’.

Electoral corruption persisted throughout the period covered by our 1832-68 project. At the 1865 election, an astounding 64% of Lancaster’s voters either took or gave a bribe, while at Totnes, bribes of up to £200 were offered for a single vote. Both these constituencies, together with Great Yarmouth and Reigate, were stripped of their representation by a special clause in the 1867 Reform Act. The remedy of disfranchisement had previously been applied to the venal boroughs of Sudbury (in 1844) and St Albans (in 1852).

The disfranchisement of some of the worst constituencies was just one of the ways that Parliament attempted to tackle the problem of electoral corruption. Alongside major pieces of legislation such as the 1854 and 1883 Corrupt Practices Prevention Acts, the 1868 Election Petitions Act and the introduction of the secret ballot in 1872, there were a number of lesser measures, and efforts were made to pass several more.

Speaking in the House of Lords in 1847, Lord Lansdowne – a political veteran who had held office under every monarch since George III – observed that

year after year, Parliament after Parliament, during the last century attempts had been made to repress by statute those abominable practices. Some of those Acts had been adopted, others had been rejected; but all of them had afforded convincing proof in their progress that of all the subjects for legislation this was most difficult to handle.

My conference paper explored some of the reasons why Parliament found the issue of electoral corruption so hard to deal with, and began by considering the large amount of parliamentary time and effort which this problem consumed. Between 1832 and 1868 well over 700 election petitions appealing against election results on the grounds of bribery, treating and other electoral misdemeanours were presented to the House of Commons, and more than 400 of these were subsequently heard by an election committee composed of MPs. Eleven MPs served on each election committee up until 1839; seven MPs between 1839 and 1844; and five MPs from 1844 until 1868, when the Commons handed over this task to election judges sitting not at Westminster, but in the constituency under investigation.

Attempts to legislate also proved time-consuming, given the complexities of electoral law and the great interest MPs took in a question which affected them so directly. One Liberal backbencher declared that the prolonged debates on the 1854 Corrupt Practices Act had shown that ‘a bribery Bill was almost sufficient for a Session in itself’. Sir Rainald Knightley successfully used the issue as a blocking tactic to scupper the Liberal ministry’s 1866 reform bill, with his instruction that it must include ‘provision for the better prevention of bribery and corruption’. This was intended to fatally overload the measure. The most comprehensive reform on this subject, the 1883 Corrupt and Illegal Practices Prevention Act, had already been discussed in the 1881 and 1882 sessions before it was finally passed. It spent 23 nights in committee in 1883, and took up the equivalent of ‘one third of the full time allotted to the Government in the course of an average session’.

The difficulties of reform were compounded by several other factors, including the wide range of potential remedies which could be applied, ranging from disfranchisement to reforming the system of trying election petitions. For many voters – and indeed non-voters – elections were seen as an opportunity to make some money, or at the very least, to eat, drink and be transported to the poll at the candidate’s expense. There was therefore very little outside pressure for reform. For MPs too, some of this expenditure – paying the expenses of poor voters to come to the poll, or providing refreshment for those who had travelled some distance to vote, for example – seemed little more than innocent hospitality. 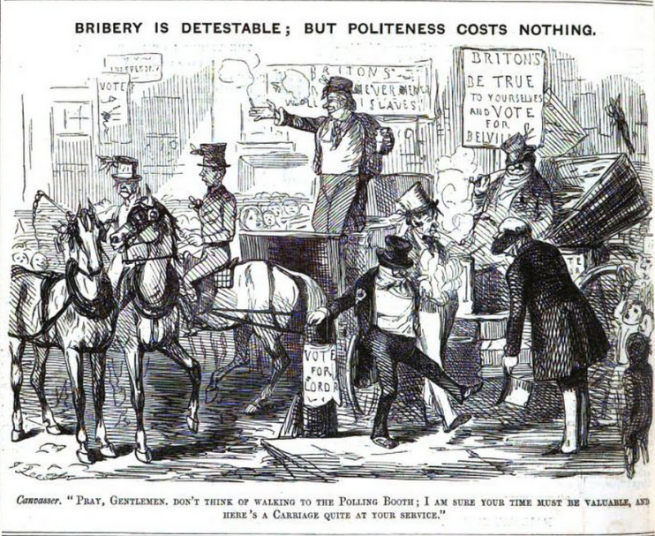 The debates on the 1854 Corrupt Practices Act give a clear sense of MPs grappling with whether it was possible to draw some kind of dividing line between election expenditure which was legitimate and unobjectionable, and election expenditure which, while not necessarily corrupt in itself, could open the door to corruption and should therefore be prohibited. As election costs spiralled with a growing number of election contests and the extension of the franchise in 1868, MPs became increasingly willing not only to take decisive action against the problem of electoral corruption, but also to protect their own pockets by tackling the related issue of election expenditure. This combined attack on corruption and expenditure was central to the 1883 Corrupt and Illegal Practices Prevention Act, the most significant nineteenth-century legislation on this issue, which had far-reaching consequences for electioneering and party organisation.