We’re delighted to host a guest blog from Dr. Gary Hutchison, Research Associate on the Victorian Election Violence Project at Durham University. Here he outlines the project’s methods and shares some of its preliminary findings.

Electoral violence plagues many current developing countries, but it is not a new phenomenon. Violence and intimidation were a common part of elections in the United Kingdom up to the early twentieth century. Our project, based at Durham University and funded by the ESRC and AHRC, will use new detailed data to examine electoral violence in England and Wales from the Great Reform Act (1832) up to the Great War (1914). This involves building a large database of instances of election violence, ranging over 20 general elections and encompassing all types, from minor property damage to outright rioting.

Based on the exceptionally detailed historical records available for Britain in this period, we aim to provide new answers to some of the most challenging questions about what leads to electoral violence, and about its effects. For instance, the project will examine how much of this violence was used strategically as a tool of corruption, or whether, as many contemporary historians have argued, it was an unfortunate by-product of the carnival atmosphere of Victorian elections. Alongside other areas of inquiry, including the identification of who tended to perpetrate and fall victim to election violence, we are also examining its overall decline as a phenomenon. 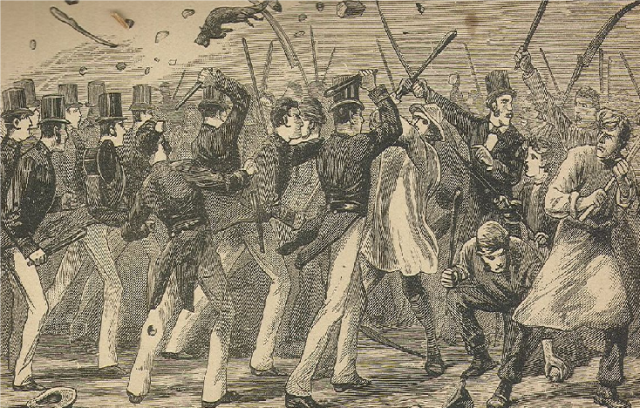 In order to build up our database, we are using exceptionally detailed records, including government and police records. Our most important source materials, however, are the 600-plus newspaper titles which have recently been digitised. Reports of violent events, alongside articles reporting on the individual court proceedings which often followed, are invaluable historical sources. They allow us trace a large number of individuals’ voting histories over multiple elections and correlate this with incidents of violence, along with various background characteristics (e.g., age, education, income, employment etc.). In this way, we can study the microdynamics of electoral violence and see how violence affected voting behaviour over time, and across multiple elections.

Independent of our analysis, these linked quantitative and qualitative datasets are intended to be a significant future resource for other scholars. It is hoped that these freely-available datasets will be a tool to answer a wide variety of other research questions, for scholars in history, political science and other disciplines (e.g. criminology).

Now 14 months into the 3 year project, we are currently in the process of collecting and coding newspaper reports of electoral violence. A cutting-edge and multi-stage text selection process employing machine learning algorithms has been developed in order to find relevant articles. These articles are then handed to a highly-trained team of over 40 Research Assistants for analysis and coding. This is executed through an easy-to-use and custom-built online platform which allows them to view, input, and submit codings remotely, on a mass basis.

Though our dataset is very far from complete, our preliminary conclusions are suggestive – it appears that English and Welsh election violence was far, far more common than even the most recent and advanced previous scholarship has suggested. For instance, Wasserman and Jaggard (‘Electoral violence in mid nineteenth century England and Wales’, Historical Research, 2007) found five major disturbances and a single outright riot for the 1857 election (thought to be one of the quieter contests). Even when employing a conservative comparative interpretation of their categorisations, we’ve found at least ten disturbances and six riots for this election. On the lower end of the scale, smaller individual incidents, including individual assaults, property damage, and forcible kidnapping of voters were commonplace for each election looked at so far.

Violence also changed over time – a broad-stroke comparison between the elections of 1832 and 1868, for instance, shows a roughly comparable number of riots and disturbances. The effects and intensity of these, however, was different. While many riots and disturbances in 1832 took place over two or even three full days, almost all major incidents in 1868 began and ended on the same day. Most notably, we have uncovered at least twenty deaths directly caused by the 1832 contest. The death-toll for the 1868 contest was also significant, but comparatively lower, at a minimum of eight fatalities inflicted as a result of elections. These eight fatalities were a feature of the over thirty full-scale riots which occurred – often involving thousands of people, and featuring serious injuries, occasionally devastating property damage, and significant military/police responses.  There are 30 days in November, the polling period for that year – this equates to an average of one full-scale riot per day, though in practice the distribution of violence (of all types) was far more concentrated. Smaller-scale election violence incidents tend to be more spread out – the majority of riots and serious disturbances, however, were concentrated on three days, when many constituencies chose to hold their nominations or polling.  The most violent day, Tuesday 17 November 1868, was the very first day when polling could be scheduled. At least eighteen riots, disturbances, and incidents took place across England and Wales on this single day. 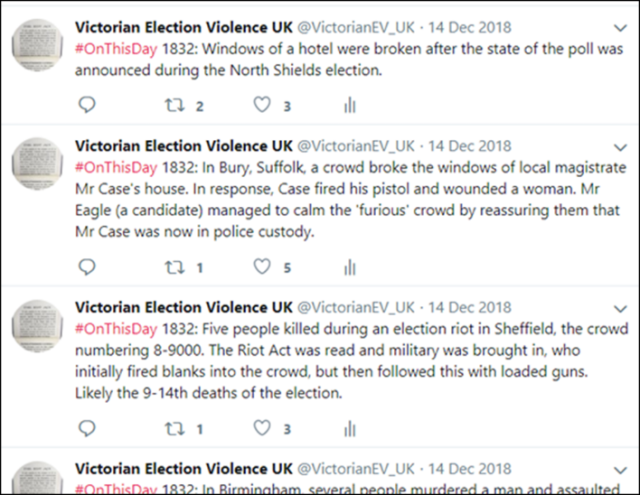 Our Twitter account posts links to new blogs on a weekly basis, recounting newspaper reports of election violence ranging from riots to individual assaults. We have also previously posted two month-long series #OnThisDay accounts of election violence for the 1832 and 1868 elections. Beginning at the end of March, we will repeat this for the 1880 election, on its 139th anniversary.

We are currently collecting many more violent events arising from elections across the period 1832-1914; their causes and consequences were varied and complex. We aim to examine these in detail over the next 22 months.

This entry was posted in Elections, Guest blog and tagged election violence, riots. Bookmark the permalink.