A successful Deptford timber merchant, Peter Rolt rose to eminence as a dockyard contractor and became one of the greatest of London’s shipbuilders. He was elected as Conservative MP for Greenwich in 1852. An ebullient character who was known for his ‘quiet and ready humour’, he later achieved fame as the builder of Britain’s first ironclad warship, HMS Warrior, in 1860.

A ‘Thames man’, Rolt was born at Deptford in 1798. He was descended on his mother’s side from the Elizabethan shipwright, Peter Pett (d. 1589), whose son Phineas (1570-1647), was the first commissioner of Chatham dockyard. His father’s family had maintained a yard on the Thames since the eighteenth century, and his maternal and paternal grandfathers and his father had all worked as dockyard officials.

After setting himself up as a timber merchant Rolt was married in 1820 to Mary Brocklebank, whose father Thomas was managing director of the General Steam Navigation Company. Rolt later set up the firm of Brocklebank & Rolt with his father-in-law. He established his reputation as a government contractor by constructing two important docks for the Admiralty. The first project, commenced at Woolwich in October 1843, was 300 ft. long and 92 ft. wide, and on completion in 1846 was hailed as the finest of its kind in Europe. Then, in 1847 he commenced work on a new basin at Portsmouth for fitting out steam vessels for the navy. The first of its kind to be built in Britain, it was considered a ‘stupendous’ feat of engineering when it was opened by Queen Victoria and Prince Albert in May 1848.

Greenwich Hospital from the River (1835), by John Dean Paul (C) Museum of London

By this time Rolt had already been considered as a Conservative candidate for Greenwich, and had joined the board of the Surrey Commercial Docks Company. After successfully completing his remaining Admiralty contracts – which would have disqualified him from sitting in the Commons – he accepted an invitation to stand for Greenwich at the 1852 general election. Appealing to the many ‘working mechanics’ of the borough, he championed the principle of ‘Free-trade in the food of the people’, but argued that the ‘hasty alteration’ of the navigation laws had damaged British shipping interests. His advantage as a large-scale employer in the constituency and a ‘home made’ candidate meant he topped the poll ahead of three Liberal candidates after an election which reportedly cost him £20,000.

Distracted by his business interests, Rolt made little mark in the Commons, although he proved a ‘cordial’ and consistent supporter of Lord Derby’s party. Convinced that Protestantism was ‘the glory and bulwark of the British Empire’, he refused to support what he considered to be the ‘propagation’ of Catholicism through the parliamentary grant to Maynooth College in Ireland, and was an opponent of the ballot. 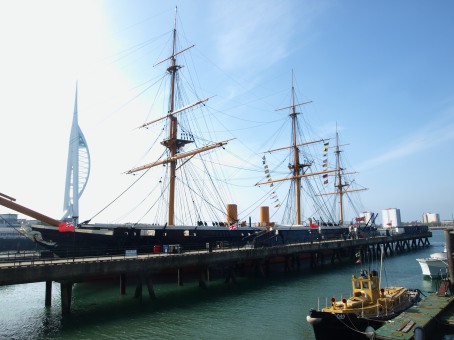 In 1856 Rolt purchased the prestigious shipbuilding works on the Thames at Blackwall which had been established by his recently bankrupted son-in-law, Charles John Mare (1814-98), who had been unseated for bribery at Plymouth in May 1853. Since Rolt intended to take over Mare’s partly executed Admiralty contracts he resigned his seat and formed the Thames Ironworks and Shipbuilding Company, whose onsite foundry enabled Rolt to overcome a variety of engineering challenges. His shipyard became the largest on the river Thames and its first notable success came in December 1860 with the launch of Britain’s first ironclad warship, HMS Warrior, which he had built at a cost of £254,000 and which effectively secured Britain’s naval pre-eminence for another generation.

Tall, ‘well setup and dignified’, Rolt maintained a high profile in Greenwich, where he was lauded as ‘a capital dinner-giver’ and his menus regarded as ‘models of gustative propriety’. He retained an interest in politics and was an active member of the Conservative Registration Association of the City of London, for which constituency he proposed a candidate at the 1868 general election.

By this time financial difficulties had prompted Rolt to revamp his company by adding graving dock and engineering departments. Further transformations of the business in 1871 and 1875 led to accusations that he and his associates had profited at the expense of their shareholders, but he remained head of the company until the end of his life, the success of Warrior having attracted orders for armour-clad vessels from the great naval powers of the world, including Russia, Turkey, Spain and Germany.

‘Gallant, jaunty, conversational’, Rolt was always ‘scrupulously dressed’ and cut an ‘almost juvenile figure’ up until his death in September 1882. His company continued to enjoy a close relationship with the Admiralty until 1912 when, after completing the dreadnought HMS Thunderer, the Thames Ironworks, which in 1895 had spawned the football club which subsequently became West Ham United, closed its gates for the last time.

This entry was posted in Biographies, MP of the Month and tagged Deptford, Greenwich, HMS Warrior, Navy, Peter Rolt, shipbuilding. Bookmark the permalink.