Last week two members of the Victorian Commons project gave papers in Manchester, at a conference held at the People’s History Museum, home to what must surely be one of the UK’s finest collections of political memorabilia associated with mass movements.

Philip Salmon spoke about the role played by non-electors, including women, in many pre-democratic Victorian elections, showing how open public voting, the possession of multiple votes, and popular ideas about delegated or ‘virtual representation’ enabled those without the franchise to both participate in and influence elections. As one candidate put it in 1841:

‘The vote is public property, the elector is only a trustee, and you the non-electors have the right to scrutinise and to direct the exercise of the voters’ function’

Rather than being mere spectators, non-electors used well-established forms of legitimate social and moral influence, as well as ‘illegitimate’ and ‘unconstitutional’ methods, to pressurise and persuade those listed on the new electoral rolls introduced in 1832 to behave in a certain way at the poll and ‘represent’ their views. This was made easier by many electors being able to cast more than one vote. ‘I always gave one vote for principle, and the other for interest’, observed one veteran voter.

These activities not only help to explain the striking presence of non-electors in most visual depictions of elections in this period, but also suggest how Victorian polls could be far more participatory and popular than traditional models of democratisation would have us believe.

Martin Spychal took a fresh look at debates about the electoral system after 1815, demonstrating how Britain’s increasingly factional post-Napoleonic domestic climate and discussion about the reform of corrupt boroughs contributed to a break-down in the eighteenth-century defence of Britain’s unreformed electoral system by 1830.

Drawing from a text-mining analysis of parliamentary debates between 1774 and 1868, Martin demonstrated how terms such as the ‘agricultural interest’, the ‘manufacturing interest’ and the ‘shipping interest’ had entered the vocabulary of parliamentarians by the 1820s, on account of the economic policy of successive Tory governments and repeated episodes of rural and urban distress between 1815 and 1830 (see below). 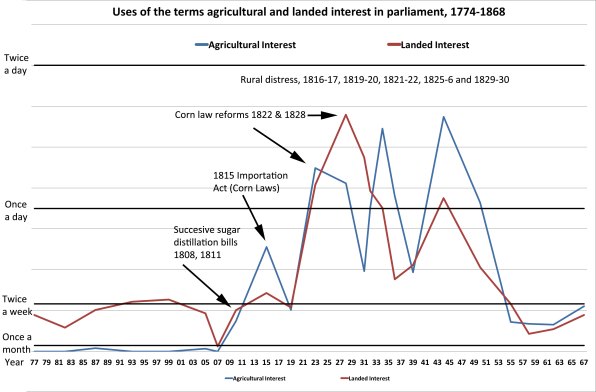 This was significant for parliamentary reform as during the eighteenth century, politicians had defended Britain’s ancient electoral system by arguing that it provided for a balanced representation of interests – the commercial interest, the landed interest, the monied interest and the professional interest. 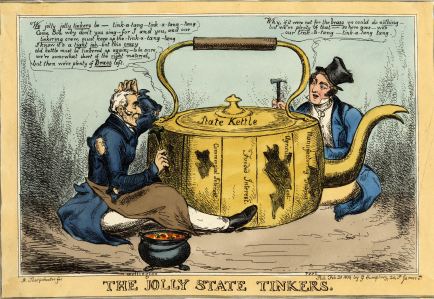 Martin showed how this new language of interests quickly seeped into debates about the unreformed electoral system as cases of corruption during the 1818, 1820 and 1826 elections forced parliamentarians to confront the issue of redistributing the seats of individual rotten boroughs. One by one, parliamentarians from across the political spectrum, who had previously viewed the electoral system as perfect, came round to the notion that Britain’s electoral system was no longer fit for the times.  Some saw the enfranchisement of towns such as Manchester, Birmingham and Leeds as a means of providing representation to Britain’s newly emergent manufacturing and commercial interests. While others, mainly country gentlemen nervous about alterations to the corn laws, became increasingly militant about ensuring an increased representation for the landed and agricultural interests.

All of this spelled disaster for the prime minister, the Duke of Wellington, when on 2 November 1830 he infamously declared that Britain’s

Within a fortnight Wellington had resigned. He was replaced by the second Earl Grey, who took charge of a new government committed to one issue: the need to re-balance Britain’s electoral map so that it better represented the nation’s newly complex interests.