One of the themes being explored by the Victorian Commons project is the decline of ‘independence’ in the 19th-century Commons and the rise of party-based voting by MPs – a development neatly captured in Gilbert and Sullivan’s famous lampoon of 1882 about MPs being forced to ‘leave their brains outside’ and ‘vote just as their leaders tell ‘em to’ (Iolanthe).

MPs continued to assert their independence on a number of major issues throughout the 1832-68 period, as the rebellion of the Tories against Peel on free trade in 1846 or the split in the Liberals over parliamentary reform in 1866 amply demonstrate. Few, however, chose to defy the party leadership quite so publicly or defiantly as Swynfen Jervis, the ‘eccentric’ Liberal MP for Bridport from 1837-41. 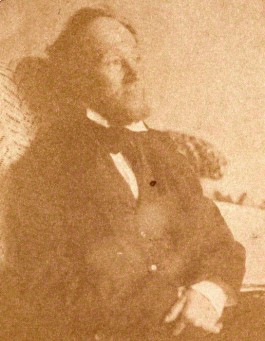 Jervis stands out for all sorts of reasons, not least because of his zealous support for free trade at a time when most landowners continued to defend the corn laws. Unlike many inheritors of large country estates, Jervis was convinced that removing the import duties on foreign corn would benefit agriculture and that free trade itself was the ‘birth-right of every Englishman’. Jervis even promised to compensate all his tenant farmers on his Darlaston Hall estates should they suffer. ‘If any reduction takes place in the price of grain without a proportionate rise in the demand for other agricultural produce’, he announced, ‘I am ready to meet such a change … by a corresponding reduction of rent’.

It was the striking manner in which Jervis rebelled against the Whig-Liberal government on a crucial Irish vote in 1839, however, which brought him to national attention. Rather than simply staying away or quietly voting against the government, Jervis took the highly unusual step of sending the private communication he had received from the government Whip, Edward Stanley, to the newspapers. He then added a full explanation of his reasons for refusing to obey. ‘As an earnest Reformer, I have always voted with ministers’, he declared, ‘but the question which is now about to be raised in the Commons, however it may be glossed and disguised …  had been made a convenient stalking-horse to support their waning popularity’ and ‘appears to me utterly impossible to approve … without indirectly sanctioning their general policy’.

The press had a field-day, especially as official party ‘whipping’ was still in its infancy and remained cloaked in controversy. ‘The letter of Swynfen Jervis, an old and staunch Reformer, repelling the official application of the secretary of the treasury for his vote … has excited the universal displeasure and animadversions of minsters’, noted one Tory paper. Commentary in the Liberal press included assertions that ‘the member’s heart is with the Tories’ and mockery of him as a ‘strange eccentric being, who professing out and out democracy, “is everything by turns and nothing long”’. Bridport’s electors, however, were more forgiving. ‘I see nothing but is manly, straightforward and honest in the conduct of Mr. Jervis’, wrote one local observer.

Jervis continued to defy the Whig-Liberal government on a range of issues after 1839. He also earned the opprobrium of the Tories by launching a scathing attack on the Church of England in more private correspondence, this time with a local parson, that found its way into the press. Despite remaining popular with the ‘ultra-Radical clique’ at Bridport, Jervis retired as its MP in 1841. Meeting him around this time, the Tory essayist Thomas Carlyle didn’t mince his words:

A wretched dud called Swinfen Jervis … called one day … a dirty little atheistic radical, living seemingly in a mere element of pretentious twaddle, with Sheridan Knowleses … and all the literary vapidities of his day.

A subsequent associate of the pre-Raphaelites Dante and Christina Rossetti, who were regular visitors to Darlaston Hall,  Jervis is best remembered today for his poems and his Dictionary of the Language of Shakespeare, which appeared posthumously in 1868.

The full biography of Swynfen Jervis will soon be available on our free preview website. For details of how to obtain access to this or any other of our completed articles please click here.

This entry was posted in MP of the Month and tagged free trade, Party rebellions, rebel MPs, whip. Bookmark the permalink.