Caroline Shenton won the Political Book of the Year Award in 2013 with The Day Parliament Burned Down and its sequel Mr Barry’s War is published this month.

In this guest post she reflects on an often-forgotten aspect of the background of Charles Barry, architect of the New Houses of Parliament.

On the night of 16 October 1834, thirty-nine year old Charles Barry was travelling back to town from business in Brighton. As his stagecoach trundled over the top of the North Downs, and began its descent towards the city,

a red glare on the London side of the horizon showed that a great fire had begun.  Eager questions elicited the news that the Houses of Parliament had caught fire, and that all attempts to stop the conflagration were unavailing. No sooner had the coach reached the office, than he hurried to the spot, and remained there all night.  All London was out, absorbed in the grandeur and terror of the sight … the thought of this great opportunity, and the conception of designs for the future, mingled in Mr Barry’s mind, as in the minds of many other spectators, with those more obviously suggested by the spectacle itself. [Alfred Barry, The Life and Works of Sir Charles Barry (1867)]

Barry had more reason than many to wonder about the future of the Palace.  One of the most startling things about the enigmatic man who became the architect of the new Houses of Parliament was that he was born and brought up in Westminster itself and knew the area inside out even before the competition which changed his life. 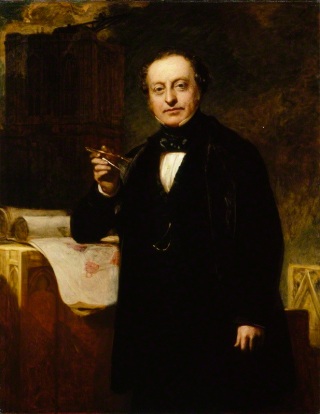 The ninth of eleven children of a government Stationery Office supplier, Barry was born and spent his childhood at 2 Bridge Street, which ran along the side of New Palace Yard, opposite the door of Westminster Hall at the northern end of the ramshackle old Palace.  He was christened at St Margaret’s, Westminster, the parish church of Parliament, only a few steps from home. Some fifty years after Barry’s birth, the Clock Tower of the New Palace of Westminster – its most well-known feature – began to be constructed just opposite his birthplace. Orphaned at ten years old, at fifteen he was articled to a firm of surveyors in Lambeth across the river.  So up until he was twenty-one, Barry lived and worked in the immediate neighbourhood of the Houses of Parliament, though very different to the one which is familiar to us today.

The old Palace must have been a constant presence in his life.  From his attic bedroom at the top of the Barry home it would have been possible to see the north door of Westminster Hall, still with the law courts held inside, as well as the Abbey and St Margaret’s, a view painted in the 1820s by Auguste Pugin, father of Barry’s most famous collaborator.  As a trainee surveyor and architect Barry’s daily walk over Westminster Bridge to Lambeth provided fine views of its eastern flank across the Thames.  Growing up in its shadow and then working across the river would have impressed on Barry’s vivid imagination the muddled shapes and textures of the Palace which had been home to the House of Lords since the thirteenth century, and to the House of Commons since the Reformation.  In 1812, at the age of seventeen, he successfully entered a drawing for exhibition at the Royal Academy for the first time. Tellingly, its subject was the interior of Westminster Hall.  For the rest of his life, Barry both drew on the existing iconography of Westminster and then indelibly imprinted his own vision on it.

‘What a chance for an architect!” he exclaimed on watching the terrible fire of 1834.  But it was also an amazing opportunity for a local boy.  For when, in 1835, he entered the competition to design a new Houses of Parliament, he had – like the other 96 entrants – to do it anonymously.  They weren’t allowed to sign their drawings but instead each competitor marked the corner of every sheet with a unique symbol – or rebus, as it was called – and then placed their name in an otherwise unmarked envelope bearing the symbol on the outside, to be opened only if they won.  Barry’s choice of rebus was the Portcullis: the heraldic badge of Lady Margaret Beaufort found peppered all over the Henry VII Chapel at the east end of Westminster Abbey (whose Perpendicular style Barry had already reflected across his whole design).  This very personal choice from a building so well-known to Barry subsequently became the universal symbol for Parliament, and can be found decorating nearly every nook and cranny of the new Palace, thanks to Barry’s collaborator, A. W. N. Pugin who incorporated it into the carpets, wallpaper, fixtures and fittings, and woodwork of the Palace’s interior, and the stone mason John Thomas who was responsible for the exterior carvings.  Today, Portcullis House, the parliamentary building which houses MPs’ offices and committee rooms, stands on the very site of Barry’s childhood home.

Despite living for a time in Hatton Garden and then the West End, in 1840 Barry moved his wife and family to 32 Great George Street, so that he could keep an eye on the growing Palace just a few hundred yards away.  Great George Street was in fact simply an extension of Bridge Street westwards towards St James’s Park.  In the 1850s, Barry was highly influential in the design and construction of a new Westminster Bridge whose profile he was determined had to blend with the Palace when viewed from downriver.  And finally, when he died in 1860, worn out with the stress of working on the Palace for twenty-five years, Barry was buried in Westminster Abbey among the most famous of his peers, but also fittingly, just a stone’s throw from the place where he was born and had gazed upon from his attic bedroom whose walls he had once decorated with imaginary scenes of faraway places.