MP of the month: Sir Harry Neale and ‘outside interests’ 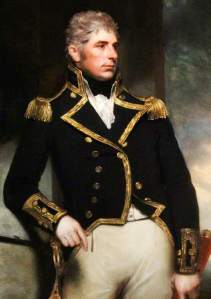 The issue of MPs having ‘outside interests’ is not one traditionally associated with the Victorian period, when all MPs were unpaid and had to fund their own election campaigns, often at vast expense. Victorian MPs, almost ipso facto, had to have extensive outside interests. One result of this was that many MPs were far better known for their achievements outside the Commons, as professionals, entrepreneurs and leading figures in other fields. Some of our earlier blogs have highlighted the careers of these impressive polymaths.

The problems over ‘outside interests’ encountered by Sir Harry Neale towards the end of his Commons career therefore came as something of a surprise. One of only four post-1832 MPs to have sat in the 1790 parliament, Neale had represented his family’s pocket borough of Lymington as a staunch Tory on four occasions over the course of almost half a century, whilst at the same time pursuing a highly distinguished naval career. By 1830 he was an admiral, whose service afloat ‘always took precedence over Parliament’.

In January 1833 it was considered ‘certain’ that Neale would be appointed as the next commander-in-chief at Portsmouth, the most senior of the port postings for an admiral. On 24 Aug. 1832 the Whig lord of the admiralty Sir James Graham MP had offered Neale the post when it became vacant ‘next year’, which Neale had ‘thankfully accepted’. When it came to it, however, Graham included a caveat, 11 Jan. 1833:

In pursuance of my promise, I hasten to repeat my offer of the appointment to you. I must, however, express to you the most decided opinion that a seat in Parliament and the command at Portsmouth are incompatible … I should not be justified in giving you the appointment which I offered you … except on the assurance that, having hoisted your flag, you would vacate your seat immediately.

Neale’s refusal to comply with such ‘obnoxious’ terms effectively ended his naval career. ‘I cannot comprehend how a seat in Parliament can be incompatible with a professional command, the duties of each are wholly unconnected’, he replied, 15 Jan. 1833, citing the number of military commanders who had previously sat in both Houses. Graham’s response that Neale would be unable to obey calls of the House cut little ice, and an increasingly acrimonious exchange of letters followed, finding their way into the press, in which Neale accused Graham of a blatant ‘want of candour’ in trying to sneak in a ‘new regulation’.

The significance of their row was not lost on MPs. In the Commons, Lord Chandos and the naval captain Charles Yorke, Conservative MP for Cambridgeshire, rallied to Neale’s defence, demanding to know why Graham had allowed the Whig MP Sir Thomas Trowbridge to continue in the command of a frigate? Perhaps it was because Neale was an opponent and Trowbridge a supporter of the government, they protested.

Meanwhile a number of Radicals, including Joseph Hume MP, welcomed Graham’s actions as evidence of a new morality regarding public office holding and the duties of MPs after the Reform Act. ‘Hitherto it had been thought that a man could be in two places at the same time, but that notion was now going out of fashion’, Hume declared, 14 Feb. 1833.

In reality, however, Neale’s case was probably less about a growing concern over ‘incompatible’ duties than his own political behaviour. In a highly revealing insight into the unwritten codes of conduct associated with promotion and political activity, Yorke’s uncle, a former Tory lord of the admiralty, and Sir Thomas Byam Martin, another Tory admiral, both agreed that the offer of such an important command so early on was unprecedented, and ‘therefore manifestly a job for the instant’. With Neale about to campaign against the Whig foreign secretary Lord Palmerston at the 1832 Hampshire South election, the hint should have been clear. ‘Sir Harry ought to have dwelt on this’, Martin observed. ‘But for his active and personal opposition to Lord Palmerston’, another commentator noted, Neale would ‘doubtless have been promoted to port admiral’.

Neale retired from the Commons at the 1835 election, but not from politics. In a major upset for the Whigs, and with evident relish, he oversaw the Tory campaign that led to Palmerston being ejected from his Hampshire seat.

The draft biography of this MP and over 700 others are available on our online preview site. To obtain access click here.

This entry was posted in Biographies, MP of the Month, Parliamentary life and tagged Lord Palmerston, military MPs, Navy, outside interests. Bookmark the permalink.