Inside the mausoleum of the Church of St. Mary’s, Long Newton, in county Durham, is a small mural commemorating the life of Lord Adolphus Frederick Charles William Stewart Vane-Tempest (1825-1864), our MP of the Month for May. Vane-Tempest was the second and favourite son of Frances Anne Vane-Tempest, Marchioness of Londonderry, who had entirely rebuilt the church in 1856-57. His modest memorial, though, is overshadowed by an elaborate monument to his father, Charles William Stewart, third Marquess of Londonderry, a dominant and divisive figure in Durham Conservatism throughout the first half of the nineteenth century.

A measured assessment of Vane-Tempest’s role in the Victorian Commons, as Conservative Member for Durham City, 1852-53, then Durham North, 1854-64, has been similarly eclipsed, most notably by an all-consuming focus on his fragile mental health and alcohol addiction. Queen Victoria felt that he had ‘a natural tendency to madness’, while an unsympathetic historian has labelled him ‘a syphilitic alcoholic wastrel’. Such descriptions, however, belie a parliamentary career characterised by thoughtful and important contributions to debate, particularly concerning the condition of soldiers serving in the British army.

Vane-Tempest’s political journey was initially beset by interruptions. His election for Durham City in 1852 was subsequently declared void on petition, on the grounds of bribery by his agents. He swiftly secured election for Durham North in April 1854, but in the autumn of that year he took a leave of absence from his parliamentary duties to serve in the Crimea with the Scots Fusilier Guards, which he had joined in 1843. Present at the bloody siege of Sebastopol in November 1854, he wrote his mother a series of letters from the front, giving her ‘deplorable accounts’ of the soldiers’ predicament. He was awarded the Crimean medal and clasp, but the ravages of the war took their toll, and he began to display ‘eccentric behaviour on his return to civilian life’. 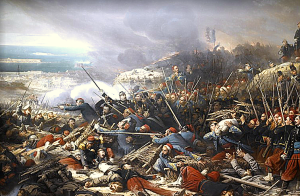 Despite suffering from bouts of mental instability thereafter, Vane-Tempest became a vocal and authoritative champion in the Commons of soldiers’ welfare, drawing on his experiences in the Crimea. He called for a reform of army pensions, revealing that officers severely wounded in the Crimea could not claim one, which was ‘not a principle on which a great country like this ought to act’. After serving on two select committees on the land transport corps, he lobbied ministers over the case of the corps’ officers, who had not received half-pay following its abolition. Angered by what he felt to be shabby treatment, he then became a dogged questioner of ministers over the arrangements for recruiting troops to serve in India, warning Palmerston’s administration that it had failed to learn the lessons of the Crimean War.

By 1861, however, Vane-Tempest’s mental health had deteriorated. In March that year, after being found ‘in a very excited state and very violent’ in Coventry Street, London, his friends took him to a ‘private lunatic asylum’, with The Times reporting that there was ‘little reason to doubt that his lordship’s mind has become deranged’. His parliamentary seat, though, remained safe. His mother, Lady Londonderry, who was the dominant influence in county Durham’s Conservative politics, believed that he would eventually recover. She was also a friend and confidante of Disraeli, who was sympathetic to Vane-Tempest’s plight, reassuring her that ‘he, who gains time, gains everything. We shall gain time, and the rest depends on Adolphus’.

Evidently in improved health, Vane-Tempest visited the United States in August 1861 and thereafter became an outspoken supporter of the Confederacy, but, compared to his earlier insightful contributions to debates on military matters, his Commons speech on the American Civil War in July 1862, made while ‘excruciatingly drunk’, ended in farce, when he fell ‘over backwards into the row behind him’. In 1863, with attacks of mania becoming more frequent, he was removed from the family home in the interests of ‘his wife’s life and safety’. He died the following year, during a struggle with four attendants.

It is understandable that historians, when mentioning Vane-Tempest, emphasise his struggles with mania and alcoholism. However, as further research on his parliamentary career reveals, this narrow focus obscures a period of significant contributions to debates concerning the state and future of the British army. Such research thus underlines the important role that fresh biographies of backbench Victorian politicians can play in moving our understanding of their careers beyond accepted historiographical stereotypes.

This entry was posted in Biographies, MP of the Month and tagged Crimean War, military MPs. Bookmark the permalink.

1 Response to MP of the Month: Lord Adolphus Vane-Tempest