MP of the month: John Tollemache and the ‘thraldom of party’ 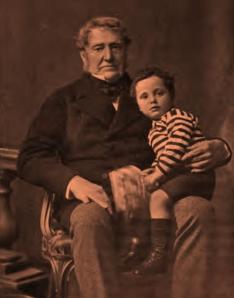 Tollemache with his grandson

Tollemache is best remembered for his pioneering allotment schemes, which originated the phrase ‘three acres and a cow’, later made popular by the land reform campaigns of Jesse Collings MP and Joseph Chamberlain MP. The allotments with three-bedroom cottages he built for tenants on his extensive estates, at a staggering cost of about £280,000, brought him to national attention in old age, when he was fêted by organisations like the Allotments and Small Holding Association.

Portrayed by his son as an eccentric ‘despot’, Tollemache’s widely admired benevolent paternalism was evidently coloured by a highly authoritarian regime at home, where he is said to have fathered at least 25 children. His many foibles included the burning of clothes left lying around his hallways and the wearing of a wig, despite having a full head of hair. At vast expense he built himself a mock-medieval fortress on the Peckforton hills, which became the family seat in 1852. Today it remains the only intact medieval style castle in England. 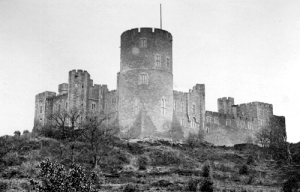 Tollemache’s 30 year career as a backbench MP for South Cheshire (1841-68) and West Cheshire (1868-72) serves as an important reminder of the different attitude to party that existed among many MPs in the Victorian era. Reference works label him as a Conservative, but he refused to ‘submit to the thraldom of party’, as he put it, and often pursued his own agenda in the lobbies. His votes against Peel over the reduction of the sugar import duties (1844), the permanent funding of the Catholic seminary at Maynooth (1845) and the repeal of the corn laws (1846) have caught the attention of a number of historians. One pioneering study by David Fisher places Tollemache among a hard-core of 16 ‘inveterate malcontents’, including Disraeli and Newdegate, who ‘ranged’ against the premier ‘on almost every major issue’ dividing the Conservative party after 1841. Other studies have noted his association with the ‘Protestant faction’ that ‘seceded’ from the Conservative party and the Carlton Club over Maynooth in June 1845, when Tollemache became a founder member (and trustee) of the ultra-Protestant National Club. Later he again broke ranks with his ‘Conservative’ colleagues by supporting Palmerston on a range of key issues, including the Liberal budget and the ministry’s handling of the Crimean war (1855) and bombardment of Canton (1857). Yet the Conservative leaders considered him ‘in every way fit’ for the peerage he was eventually given by the Disraeli ministry in 1876.

In retirement, Tollemache liked to boast that he had never given a party vote, attended a party meeting or answered a Conservative whip. Putting these sorts of claims of ‘independence’ by MPs to the test, however, is notoriously problematic, not least because it was a routine rhetorical device in most electioneering speeches. Hitherto most studies of how Victorian MPs behaved in the lobbies have been limited to specific issues or certain groups over a short timeframe. A new MP voting database currently being planned by the 1832-68 project, however, will enable researchers to undertake a far more rigorous assessment of MPs’ voting records, across entire careers and in comparison with other members. The extent to which Tollemache was unusual and any ‘thraldom of party’ really existed in this period will hopefully then become far more apparent. Further details of this new resource will follow soon.

G. Cahill, ‘The Protestant Association and the Anti-Maynooth agitation of 1845’, The Catholic Historical Review (1957)

This entry was posted in Biographies, MP of the Month and tagged allotments, Conservative, Independence, party labels, three acres and a cow. Bookmark the permalink.