To mark Parliament Week 2013, the theme of which is ‘Women in Democracy’, we would like to share some of our recent research highlighting the varied nature of female participation in British political life during the nineteenth century, despite the fact that women were formally debarred from the parliamentary franchise under the terms of the 1832 Reform Act.

In previous blog posts, we have looked at women’s roles as voters at local level: Dr. Sarah Richardson’s guest blog uncovered some fascinating evidence of women voting in parish elections in the 1830s and 1840s, while Philip Salmon considered the efforts of one Radical MP, George Faithfull, to defend the voting rights of Brighton’s female ratepayers. This blog post moves from local elections to parliamentary politics.

The 1832 Reform Act had removed numerous ‘pocket’ or ‘nomination’ boroughs whose representation was controlled or heavily influenced by a particular individual, usually a major local landowner or aristocratic grandee. However, many survived into the period after 1832: in his 1953 work The Politics of Peel, Norman Gash identified more than 40 constituencies where the MPs were effectively chosen not by the voters, but by an electoral patron. In two cases – Northallerton, controlled by Miss Peirse, and Ripon, under the influence of Elizabeth Lawrence, of Studley Royal – these electoral patrons were women. Our research indicates that a third female electoral patron can be added to Gash’s list: Lady Emily Foley, of Stoke Edith, Herefordshire, who inherited her husband’s estate (and electoral interest) in the county in 1846. At a by-election in December 1858, her brother, Lord Montague William Graham, was elected unopposed. A correspondent to the Hereford Times argued that

‘the owner of Stoke Edith estate ought to have, directly or indirectly, a voice in the legislature, and that, owing to the ineligibility of the lady in possession to a seat in the senate, she may, consistently with reason and right, authorise her brother to take her place… It is well known that her Ladyship exercises great political influence… It is for the electors of Herefordshire to accept or reject her nominee’.

On the hustings, Graham informed the assembled crowd that he had been told countless times during his election campaign, ‘Well sir, if you be as good a man as Lady Foley is a lady you will make us a good member’.

While Lady Emily Foley left the business of the election campaign to her agents and her steward, evidence of direct female participation in electioneering comes from the Yorkshire borough of Pontefract, where Benjamin Oliveira, a wealthy London merchant, was elected Liberal MP in 1852, ably aided and abetted by his second wife Emma. Oliveira represented the constituency for five years, and was a notable parliamentary advocate of the abolition of the wine duties, before his political career ended under a cloud in 1857. In a fit of pique at his election defeat that year, Oliveira petitioned against the return of one of his successful rivals. The election petition committee found that the 1857 contest had, somewhat unusually for Pontefract, been a pure one, and Oliveira failed to oust his opponent.

However, during the course of this petition hearing, Oliveira and his wife exposed their own misdeeds at the 1852 contest. Emma’s role in proceedings had, if anything, been greater than her husband’s. Much of the £4,250 which he had given to his agents to spend on electioneering – a large part of which was spent corruptly – had passed through her hands. As well as canvassing voters, she had been instrumental in negotiating with local political figures about the election costs. She and her husband had shared the decision to provide sufficient funds to secure a majority of 25 votes, rather than the more costly option of 50 votes. In addition, she had overseen arrangements to secure the withdrawal of a petition presented against her husband after the 1852 election, for which purpose she paid £2,000. Emma Oliveira’s involvement in Pontefract’s murky electoral politics may not be the most laudable example of women’s political activities, but it certainly demonstrates the significant role that they could play. 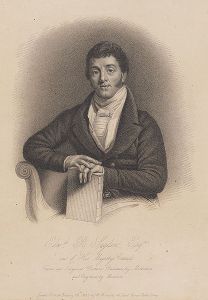 Other MPs’ wives took no part in their husbands’ elections, but could nonetheless be influential in shaping their political careers. One of the leading lawyers of his day, Sir Edward Burtenshaw Sugden, sat as Tory MP for Weymouth, 1828-31, St. Mawes, 1831-2, and Ripon, 1837-41. In December 1834 he was appointed by Sir Robert Peel as lord chancellor of Ireland. However, he resigned from this post in February 1835 because the lord lieutenant’s wife, Lady Haddington, had – following advice from Queen Victoria – refused to receive his wife at court in Dublin. The reason for this was that Sugden’s wife, Winifred, who had been his kitchen-maid, had borne him several children before the couple were married. Although his defence of his wife’s position threatened to derail Sugden’s career, he was persuaded to reconsider, and remained in post until Peel’s ministry fell from power that April. When Sugden (now Baron St. Leonards) became lord chancellor in Lord Derby’s short-lived ministry in 1852, he ‘begged hard’ for his wife to be received at court by the Queen, but to no avail. In consolation, Derby offered that ‘your lady shall be received by Mrs. D’Israeli’!

As we continue our research on the 1832-68 project, much of which can already be accessed in draft form, we look forward to uncovering further evidence of how women were able to influence and shape politics in a male franchise.