MP of the Month: Sir George Cayley, ‘the man who discovered flight’ 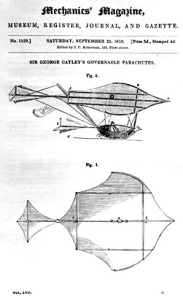 In 1909 the pioneering aviator Wilbur Wright paid tribute to an Englishman who had a century earlier ‘carried the science of flight to a point which it had never reached before and which it scarcely reached again during the last century’. That man was a Yorkshire landowner, Sir George Cayley (1773-1857), generally regarded as the founding father of aeronautical science. A gifted and prolific engineer, in 1809-10 he published a ground-breaking paper outlining the basic principles of aeroplane flight. Among his wide-ranging scientific endeavours, he invented the forerunners of the bicycle wheel and the caterpillar track, designed an artificial hand, and – having being present at the opening of the Liverpool and Manchester railway in 1830 when William Huskisson was killed – devised several schemes (of varying practicality) for improving railway safety. His experiments with flight reached their peak in 1853 when he launched the first ever full-scale glider at Brompton Dale near Scarborough, Yorkshire, reputedly with his disgruntled coachman as the pilot.

What is perhaps less well known about Cayley is that he served briefly as an MP, sitting as a Whig for his native Scarborough from 1832 until his defeat at the 1835 general election. Although he had inherited a baronetcy from his father in 1792, Cayley’s republican sympathies prompted him to refuse to be addressed as Sir George, and one Scarborough opponent mockingly dubbed him ‘Citizen Cayley’. He was active in the campaign for parliamentary reform, and in 1831 announced that he would stand as a candidate for Scarborough as soon as the Reform Bill had passed. He was elected as one of the constituency’s two MPs in December 1832.

Cayley did not, however, find parliamentary life to his liking. Although nominally elected as a Whig, he preferred to follow his own judgement and take an independent line. His rational scientific train of thought was very much in evidence when he asserted that

‘if any man is sent up to vote on any question guided only by the degree of information he and his local constituents may possess at the date of his Election, and cannot open his reasonable conviction to that wider and later grasp of information which the debates of Parliament, or its official documents, may present to him, he can make no efficient part of the deliberative wisdom which ought to guide the State’.

An indifferent speaker, Cayley rarely contributed to debate in the Commons. His rare interventions reflected his scientific interests, backing calls to update the law on patents in 1833, and supporting the efforts of his fellow inventor, Goldsworthy Gurney, to secure compensation for his experiments with steam carriages.

The suddenness of the 1835 general election meant that Cayley reluctantly felt compelled to stand again at Scarborough, as there was no time to field a replacement candidate. However, after a poor showing on the first day of the poll – elections in boroughs then having two days of polling – he admitted defeat and retired from the contest, declaring himself ‘rejoiced to be relieved from the confinement and restraint of a Parliamentary life’. He devoted himself with great enthusiasm to his scientific endeavours for the remainder of his life, dying in 1857.

For details of how to access Cayley’s full History of Parliament biography from our preview site, see here. Our Victorian Commons blog has featured two other MPs who were better known for their scientific endeavours: you can read here about William Henry Fox Talbot, the inventor of photography, and Robert Fitzroy, the pioneer of the weather forecast.