MP of the month: George Faithfull

Continuing our recent focus on Victorian female voters and women’s suffrage, this MP of the month feature highlights the career of George Faithfull (1790-1863), a Brighton radical who clashed spectacularly with his former supporters over the rights of women voters in the town’s local elections.

Faithfull’s election for the new constituency of Brighton in 1832, ‘under the very nose of the Court’, sent shock waves through polite society. ‘Some very bad characters have been returned, among the worst Faithfull’, noted the Whig diarist Greville. An ‘out and out radical’, who had played a leading role in the agitation for parliamentary reform, Faithfull ran a lucrative solicitor’s practice in Brighton, where his clients included Thomas Kemp MP, the town’s ‘leading citizen’. Faithfull had acted professionally for Kemp in the construction of Kemptown, a Nash-inspired suburb of 100 magnificent houses to the east of Brighton, and when Kemp had abandoned leadership of his personal Dissenting sect in 1823, had taken over his ministry at Trinity chapel. 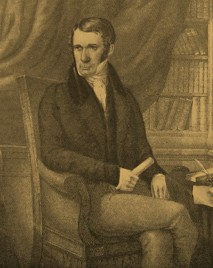 Faithfull’s tenure in parliament was short. His ‘pointed and argumentative’ style in debate won him plaudits, even from leading Whigs, but at the unexpected 1835 election he was defeated by a more moderate Liberal, who had secured the backing of the Court and the other Liberal MP, and reputedly had £20,000 at his disposal. Incensed, Faithfull founded his own newspaper The Brighton Patriot to give vent to his fury, and at the 1837 election helped to turn out his former colleague, whom he charged with betrayal.  Thereafter Faithfull flirted with Brighton’s emerging Chartist movement, lending its leaders, notably the hairdresser John Good, the support of his paper until it ceased publication in 1839.

Faithfull’s defence of women’s voting rights began in the late 1840s, when Brighton’s Liberals began agitating for the establishment of a town council to replace the town commission that ran local affairs. The creation of a council, it was argued, would extend the local franchise to all resident ratepayers as well as providing an elected mayor as a figurehead. Faithfull, however, was quick to point out that although the existing franchise in commissioners’ elections disfranchised poorer householders (as well as rewarding wealthier ones with multiple votes), it did permit 1,200 single women with property to vote each year. Under the terms of the 1835 municipal corporations act, the franchise would be restricted to ‘male’ persons only (clause 9).

Assisted by statistics showing that single women accounted for a fifth of Brighton’s ratepayers and owned almost a quarter of its property, Faithfull astonished his former supporters by defending the ‘influence of property over numbers’ in local elections and the right of ‘unprotected females’ to the vote. ‘What that gentleman had given them ’, seethed one critic, ‘was one of the worst specimens of that Toryism which it used to be his delight to condemn’. ‘The favourite doctrine with Mr. Faithfull seemed to be the protection of women (laughter)’, mocked another, adding that ‘he was as fond of the women as any man in Brighton (renewed laughter), but … he did not think a polling booth was the proper place for a woman (hear, hear)’.

Pilloried by ‘democrats’, Liberals and even former Chartists, Faithfull, the radical Dissenter, found himself in unfamiliar company. One of his most vocal backers was Brighton’s vicar, Henry Wagner:

There may be ladies of great affluence, of the best education, and of considerable intelligence, possessing a vote under the present act, who would be disfranchised; while those in humbler walks of life, illiterate and possessing none of the intelligence of the ladies … would possess the suffrage. I consider it unjust that a man should have a vote simply because he is a man, and that a lady should be disfranchised because she is a lady and the weaker body.

Despite his best efforts, including a speech of five hours at the final inquiry, Faithfull’s campaign against municipal reform was ultimately unsuccessful. The report of the privy council (after discounting all the female signatures), determined that 2,108 male petitioners were in favour of a council and 1,241 against. Dismissing concerns about the disfranchisement of women, it noted that ‘the same objections exist here as elsewhere against females exercising control over public affairs’ and cited the ‘system of our national government’. Early next year, the privy council granted a charter and on 1 Apr. 1854 Brighton became a municipal borough, divided into six wards.

The full biography and constituency articles on which this feature draws are available on our preview site. For further details click here.

1 Response to MP of the month: George Faithfull